AC Announces Two Routes That Will Fly With Canadian-Built A220 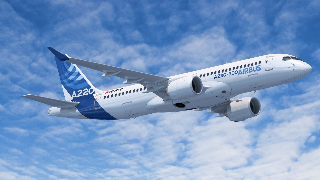 Air Canada will use its new Airbus A220-300 on two newly announced routes: Montreal-Seattle and Toronto-San Jose, California. Daily, direct service begins 4MAY, 2020 for both routes.

"This aircraft is a game changer for Air Canada as there is simply no rival in this category," said Mark Galardo, Vice President of Network Planning at Air Canada.

"The A220 will further strengthen our position on transborder and transcontinental markets and be instrumental in our continued growth. The two routes announced today are the first of many future possibilities as the A220 will allow us to further develop our North American network, offering customers new routes and more robust year-round schedules."

AC's first Airbus A220-300, built at Airbus Canada's Mirabel facility, is scheduled to be delivered later this year. Each A220 includes parts from 30 Canadian suppliers. Air Canada will be the first North American carrier to operate the larger A220-300 version of the aircraft, which has a range of 3,200 nautical miles.

To be initially deployed from Montreal and Toronto on existing Canadian and transborder routes such as to Ottawa, Winnipeg, Calgary, Edmonton and New York – La Guardia, the A220-300 will open new markets such as the Montreal-Seattle and Toronto-San Jose flights announced today.

The two-class cabin will have a total of 137 seats: 12 in a 2x2 configuration in Business Class and 125 in a 3x2 layout for Economy passengers. Customers will have more personal space thanks to the widest economy seats in the fleet, and the largest overhead stowage bins for an aircraft this size.

"Our customers will benefit from innovative design features in a spacious and comfortable cabin," continued Galardo. "When connecting through our hubs across Canada onward to international destinations, customers travelling on an A220 will benefit from a virtually seamless cabin experience offering the same level of service and comforts as on a widebody aircraft."

With these two new non-stop routes, Galardo says Air Canada is deepening its transborder network, strengthening its position in both the Seattle and Bay Area markets as it adds to its existing flights to Seattle out of Toronto and Vancouver, as well as its many flights into San Francisco in the Bay Area.