Péladeau Says He Could Beat AC Offer For TS: TS Says “Where Is It?” 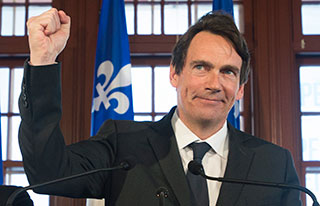 Quebec businessman Pierre Karl Péladeau says he will vote against the offer by Air Canada to buy tour operator Transat and would consider making a separate offer with partners if the deal fails.

Péladeau, who owns about 1.6% of the outstanding shares of Air Transat’s parent company, says the deal is “contrary to the public interest.”

His move could be too vague and too late: Air Canada has locked up support from Transat's largest shareholder Letko Brosseau and most analysts expect the deal will be approved by the necessary two-thirds of Transat shareholders.

However, financial website Seeking Alpha reports that Péladeau's comments could encourage some investors to "hold through the closing as opposed to selling" the stock, given the deal's need for regulatory approval, a Transat shareholder told Reuters.

Transat shareholders will decide on Friday whether to back Air Canada's $720M, $18/share, offer; the deal also requires approvals from domestic and European regulators.

Canadian Press Reports that the businessman and former politician says he has “gathered around him strong and established partners of international renown” in order to submit a possible proposal “at a fair price.” Péladeau did not specify a price in his comments, however.

Transat replied to Péladeau's comments this morning, noting that “no offer to acquire Transat has been made by Mr. Péladeau or any of his business associates.”

Without an actual competing offer from Péladeau, Transat says that “shareholders have the choice between on the one hand, receiving $18 in all-cash consideration for each Transat share they hold, or on the other hand, bearing the risks associated with the implementation of Transat's strategic plan. There is currently no concrete alternative transaction on the table.”