D.R. Posted Strong First Half, Lots Of New Development On The Way 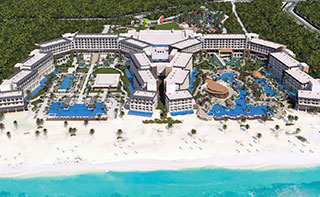 The Dominican Republic saw a 4.7% year-over-year increase in tourists between JAN and MAY 2019, reaching 2,988,155 visitors, according to figures published by the Central Bank.

Arrivals from North America saw the largest increase,accounting for an overall 8% growth in the first five months of 2019, including 2,285 more visitors from Canada.

The Amber Cove port, in Maimon, which serves the city of Puerto Plata, leads with the arrival of 115 cruise ships.

Puerto Plata is working to attract more maritime tourists with a second cruise ship terminal, Taino Bay, scheduled to open in 2020 and attracting different cruise lines. The new port is currently under construction.

Air Canada, Air Transat and Sunwing are making it easier for Canadians to travel to the D.R. this winter season. AC will offer new direct service between YQB and PUJ, while WG added a new flight from YXU to PUJ. TS announced the addition of direct flights from YVR and YHM to PUJ, and from YVR and YUL to POP.

The Dominican Republic has a number of new properties in various stages of construction. In MAR 2019, it was reported that 6,200 hotel rooms are currently under construction, 8.7% of the country’s current hotel supply.

In 2018, Puerto Plata welcomed 407,568 tourists by air and 518,121 by cruise. This represented an increase of more than 18% in the arrival of tourists by air in relation to previous years.

Puerto Plata continues to be the country’s leading cruise ship destination since the opening of Amber Cove in 2015.

With the new Samaná Whale Watcher mobile app, tourists can report whale sightings at the touch of a button, sharing the information with scientific researchers. Whale watching season runs from JAN to MAR in Samaná Bay.

The Finance Ministry and the Inter-American Development Bank recently signed a CAD$120 million loan contract for the second phase of the tourism and urban development project for Santo Domingo’s Colonial City. The Colonial City, a UNESCO World Heritage Site, remains one of the most visited tourism destinations in the Dominican Republic.

The first phase of Santo Domingo’s renovated Malecon is complete. The "Paseo Maítimo" or "Seaside Walk" features 3.5 kilometres of recreation, entertainment and improvements to the area.