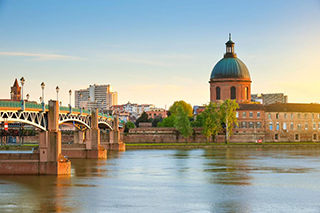 The five-times weekly flights will be operated using a 292-seat Airbus A330-300, featuring Signature Class, Premium Economy and Economy cabins.

“Combined with our recently announced non-stop flights between Montreal and Seattle, the world's other major aerospace hub, starting next year, we are helping solidify Quebec's position as a global player in the aerospace industry, which will help maintain and encourage the growth of high-skilled, high-paying jobs in the sector.”

This new route is Air Canada's sixth destination in continental France and represents further growth from its Montreal hub, where the airline has launched 35 new global routes since 2012.
"Apart from its attractions as a business travel market, Toulouse is also known for its rich heritage spanning 2,000 years, abundant culture and its culinary scene,” added Rovinescu.

“At the same time, as this route will be the only year-round service to south west France from Canada, it will strengthen Montreal's position as both a business and tourism destination while making it a premier North American Atlantic gateway, conveniently connecting customers to Air Canada's extensive North American network.”