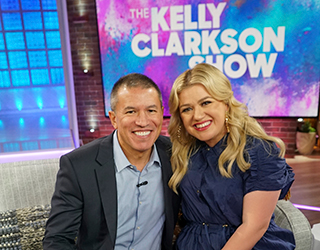 Norwegian Cruise Line has named Grammy Award-winning musician and TV show host Kelly Clarkson as the godmother to its newest ship, Norwegian Encore, set to debut in Miami in NOV.

As godmother, she will perform at the christening ceremony in MIA on 21NOV, as well as fulfill the longstanding maritime tradition of blessing and officially naming the ship.

“We knew we wanted someone who represents our core values,” said Stuart. “Kelly is a role model who is passionate about family and community, as well as music and entertainment. These are our passions too! We are honoured to have her join our family of godparents and look forward to celebrating Norwegian Encore’s debut in Miami with her, this November.”

To celebrate her new title as godmother to Norwegian Encore, Clarkson and Norwegian Cruise Line recognized and awarded 20 deserving music educators on “The Kelly Clarkson Show” with a seven-day cruise, showcasing the mutual appreciation for education and travel as a powerful tool that connects people and promotes awareness and understanding around the world.

“I am so honoured to be named the godmother to Norwegian Encore, and to get to be a part of such a special ceremony to christen the new ship in Miami,” said Clarkson. “I believe that surrounding yourself with the ones you love and taking time for them is important while having the most amazing and unforgettable vacation, which is what Norwegian Cruise Line stands for and provides for its guests.”