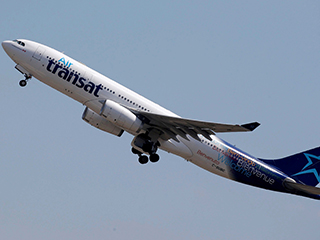 Transat has posted improved results for its third fiscal quarter, with operating income of $21.8 million, a significant improvement compared with $2.4 million in 2018.

"We're very satisfied with the strong support received from our shareholders and the final approval of the arrangement plan. The planned transaction is good news for our shareholders, our employees, our clients and our community, and we're currently working to obtain the required regulatory approvals to complete it," stated Jean-Marc Eustache, President and Chief Executive Officer of Transat.

"Meanwhile, we remain focused on our operations and note an improvement in our adjusted results for the quarter compared with last year."

Transat posted revenues of $698.9 million for the quarter, up $34.3 million (5.2%) compared with 2018. This increase was attributable to higher average selling prices and improved load factors across all markets. The number of travellers rose 4.3% in the transatlantic market, Transat’s main market for the period.

Operations generated adjusted operating income1 of $21.8 million, compared with $2.4 million in 2018, an improvement of $19.5 million. This increase was mainly driven by the higher average selling prices and improved load factors across all markets.

Excluding non-operating items, Transat reported adjusted net income of $5.7 million  for the third quarter of 2019, compared with an adjusted net loss of $5.0 million in 2018.

Over the nine-month period of 2019, Transat earned revenues of $2.2 billion, up $63.8 million or 2.9% from 2018. The higher revenues recorded during the winter season is mainly attributable to the increase in average selling prices across all markets, combined with a 2.8% rise in the number of travellers in the sun destinations market, resulting from the decision to increase capacity in that market.

For the nine-month period, operations generated an adjusted operating loss of $12.9 million compared with $14.3 million in 2018, an improvement of $1.4 million.

Looking ahead to Q4, Transat’s August to October capacity – mostly transatlantic -- is similar to that deployed on the same date last year. To date, 83% of the capacity has been sold, the load factors are lower by 0.9% compared with summer 2018 and selling prices of bookings taken are 2.1% higher than those recorded at the same date in 2018.

If the current trends hold, Transat expects its results for the fourth quarter to be slightly higher than those of last year.

On 23AUG, a significant majority of Transat’s shareholders voted in favour of an acquisition offer by Air Canada. The arrangement remains subject to closing conditions, including regulatory approvals. Transat says that if the required regulatory approvals are obtained and conditions are met, it is now expected that the transaction will close by the second quarter of the 2020 calendar year.

In the meantime, the company says it is business as usual, with the exception that Transat
has agreed to limit its undertakings and expenses related to the execution of its hotel strategy, including development of a property it purchased in Mexico last year.