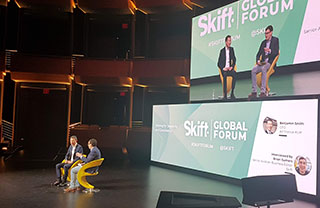 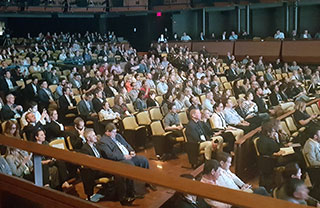 Ben Smith loves a challenge. He loves a challenge so much that he walked away from his well-compensated position as President, Airlines and COO at a resurgent Air Canada, to take a pay cut and enter a hornet’s nest as CEO of two of Europe’s iconic airlines.

The opportunity to have an impact on two storied aviation brands – Air France & KLM – was irresistible for Smith, a card-carrying aviation wonk, happy to geek out on anything from liveries to  the size of meal trays.

“I knew if I didn’t take the job I’d have great regrets,” Smith said, with Open Jaw in the audience for an on-stage interview with Skift Senior Aviation Business Editor Brian Sumers at the Skift Global Summit in New York City this week.

The screen above the stage showed a photo of an AF exec running away from unionized staff in 2015. The labour situation at the French carrier has been toxic for years.

“My number one opportunity, or challenge, was to stabilize the labour relationship,” Smith said.  “We convinced our pilots to allow us to expand our low-cost Transavia brand in Holland, (which was) possible only once we had established their trust. We must be able to complete with the likes of Ryanair and Easyjet. There are 120 airlines competing with us in Paris alone.”

Smith says his “neutrality” as a Canadian has helped, being neither Dutch nor French. Plus he is clearly sensitive to the importance of respecting his staff.

As Vincent Etchebehere AF/KL VP & GM Canada told Open Jaw recently: “He has brought modern, transparent, direct ways of doing business and new platforms for interaction with staff based on listening and sharing. It has freed up a lot of energy in the company.”

Not surprisingly, competition is always on Smith’s radar. When asked what he thought about new, low-cost carriers elbowing their way into the lucrative New York-Paris route – there will be 10 next summer – he predicted that even if they survive the summer they will struggle to keep alive in the winter when the thousands of summer vacationers trickle away.

“I don’t think the lesser airlines will survive,” Smith said. We have an amazing brand among the premium passenger.”

And what about the A380, the world’s largest passenger aircraft? “Everyone gets excited about it, and from a customer perspective the experience is good. But the reality is it’s an expensive aircraft to fly and not every airport and every gate can handle it. We have only 10 of them and if one is out of service it’s a problem. Plus the interiors are dated and it would cost some 35 million Euros per aircraft to update them. So they will be retired by 2022.”

With sustainability a consistent theme at the conference, which attracted 1,000 travel and tourism execs from around the world, it came up in the discussion with Smith. Europeans, especially, are sensitive to carbon footprints and one unorthodox way Smith is addressing this is actually reducing flights between AMS and BRU “to encourage people to get on the train.”

“Our employees push for a focus on environmental concerns too. They want to be proud of the company they work for,” Smith said.