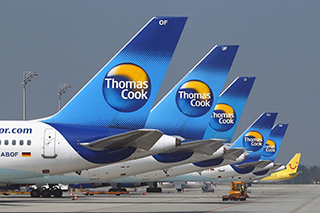 After 178 years, Thomas Cook shut down abruptly last night when last-minute talks for a financial rescue plan failed and the UK government turned down a plea for a bailout.

The UK is now launching the largest peacetime repatriation of its citizens – up to 160,000 of them – to bring Thomas Cook travellers home. The failure will also impact up to 1 million consumers with forward bookings.

The airlift – dubbed ‘Operation Matterhorn’ -- will use a fleet of 40 aircraft cobbled together from a variety of airlines. It is estimated to be about 50% larger than the one put into action when Monarch Airlines failed two years ago. The repatriation process is expected to take two weeks and more than 1,000 flights.

Thomas Cook said in a statement that its board "concluded that it had no choice but to take steps to enter into compulsory liquidation with immediate effect" after talks on a financial rescue failed.

"This marks a deeply sad day for the company which pioneered package holidays and made travel possible for millions of people around the world," Fankhauser said.

The collapse is sending shockwaves through the global travel community. Thomas Cook had about 21,000 employees around the globe, about 9,000 of them in the UK. On the retail side it operated approximately 600 UK-based brick-and-mortar travel agencies. Company revenues last year were in the range of $14.9 billion.

As the final Thomas Cook flights landed last night, passengers reported cabin crews in tears, but praised their professionalism to the end.

The collapse of Thomas Cook will be very costly to UK taxpayers, with compensation payouts guaranteed to all customers who had booked holiday packages through the firm. Some estimates quoted by the Guardian put the total cost — including the mass repatriation — as high as $1 billion.

But government officials say that while it may have been cheaper in the short-term to offer a financial bailout to the troubled company, it didn’t make longer-term sense.

Transport Secretary Grant Shapps told BBC Radio 4's Today program that Thomas Cook had asked for a bailout of over $400 million, but the government rejected the pleas in the early hours of this morning.

"I fear it would have kept them [afloat] for a short period of time and then would have been back in the position to repatriate people in any case. The problems the company has are systemic," Shapps said.

From humble beginnings offering short train journeys across the East Midlands in the 1840s, Thomas Cook evolved into a massive vertically integrated travel consortium, operating hotels, resorts, airlines and cruises, with travel agents from its hundreds of stores putting the bums in seat.

Thomas Cook had a strong presence in Canada in the 1990s and early years of this century. In March 2006, Transat A.T. Inc. acquired Thomas Cook Travel Ltd. -- the company’s Canadian network of close to 200 travel agencies and currency exchange locations, for $7.4-million.

In 2007 Thomas Cook merged with MyTravel to become one of the biggest holiday companies in Europe – with operations in Germany, Scandinavia, Russia and elsewhere. However, the economies of scale and the advantages of an iconic brand failed to help the company navigate a fast-changing travel environment.