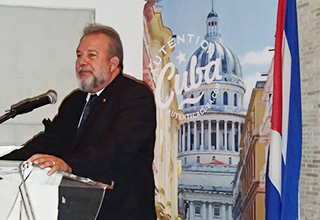 Cuba Minister of Tourism Manuel Marrero Cruz was in Toronto yesterday with a message that “tourism in Cuba is functioning as normal” despite a tightening of the U.S. economic blockade that has affected the country’s ability to import fuel.

Accompanied by senior representatives of the island nation’s hotel industry, Cruz said he came to “state the truth of what has happened in the month of September in Cuba,” and assure tour operators and travel agents that it is ready to welcome winter visitors.

Recent media reports have suggested that hotels have been closed due to a lack of fuel and hotel employees have been unable to get to work because of restricted public transportation.

“Negative opinions are being created that have nothing to do with reality,” Cruz said.  He specifically cited a recent CBC Radio Canada report in Quebec that suggested there could be “quality problems” with the Cuba tourism product because employees can’t get to work.

He assured the audience that there will be “more than enough” hotels ready to welcome Canadians and others in high season, and described steps the government has taken to deal with a fuel shortage.

“We have difficulties,” Cruz acknowledged. “We recognize them and try to do better. But we’re not as bad as some of the media wants us to be.”

Cuba and its resilient citizens are no strangers to struggle. The island nation has survived 60 years of an economic blockade by the United States, and over the past three decades has managed to build a thriving tourism industry despite daunting obstacles.

After President Obama loosened rules on U.S. travel to Cuba, hundreds of thousands of Americans flocked to the destination that has been forbidden fruit for so long. Cruise lines jumped on the opportunity to add diversity to Caribbean itineraries, with the result that 850,000 tourists arrived by sea last year, a number that was projected to grow to 1.2 million in 2019. Through the first five months of this year, U.S. arrivals were up 17%.

Then on 4JUN, the Trump administration announced new sanctions that caused U.S.-based cruise lines to immediately drop their Cuba routes – destroying the travel plans of hundreds of thousands of U.S. citizens who had already booked. The sanctions also made it much harder for American tourists to visit by air and for shipping companies to deliver fuel to a country that relies mostly on imports for its needs.

The result: Cuba was expecting to top five million visitors this year after a record 4.7 million arrivals in 2018. The new reality will be much lower – through the first nine months of the year Cuba welcomed 3.3 million tourists, including about 860,000 Canadians, 25% of the total.

Minister Cruz says September and October are low season months, when many tourism workers take vacation and hotels often close for maintenance. He says reports that hotels have closed due to lack of fuel or workers are untrue. There have been adjustments: for example, with low occupancy in September at the two Paradisus properties in Varadero, one closed and guests were combined at the other. Low-occupancy excursions have been combined in some cases so coaches were not wasting fuel driving half-full.

Minister Cruz also described efforts the government has made to deal with the fuel situation, including buying its own ships for transport and signing contracts with new suppliers. The dire situation in Venezuela, where Cuba sources a significant amount of its oil, was not mentioned during the press conference, but is seen as a contributing factor to the problem.

With September done and preparations for high-season gearing up, Cruz says “the process of normalization” for the tourism industry has begun. And he assured the audience of Canadian tour operators and media representatives that Cuba is ready to welcome guests.

“We’re not going to lie to Canada,” he said. “We will never abandon those people who give us a hand in difficult times. I’m often asked by Canadians, ‘How can we help?’ The answer is that Canadians need to come to Cuba. It’s the best way to help us, to know us and to share with us.”