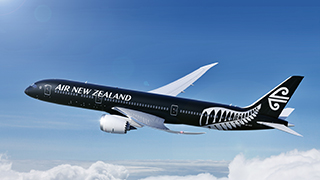 Air New Zealand says it is accelerating its ambitions for North America, with the announcement it will launch the first-ever non-stop service between Auckland and New York in October 2020, using its 787-9 Dreamliner.

The airline also announced that in order to direct capacity to faster-growing markets, it will drop its daily Los Angeles-London service from October 2020. That route was established in 1982 but the airline says market dynamics have affected performance in recent years.

"Visitor growth to New Zealand is strongest from North America and performance of our new service to Chicago is exceeding expectations. New York has been an aspiration for Air New Zealand for some time and withdrawal from the Atlantic will free up aircraft capacity to make this milestone a reality," says NZ Acting Chief Executive Officer Jeff McDowall.

"Air New Zealand is strongest when operating direct flights to and from our home base and this reset will put us in the best possible position to take advantage of increasing demand across the Pacific Rim,” McDowall added.

Flights will arrive into and depart from Terminal B at Newark Liberty International Airport. The above timings are subject to approvals and will vary with daylight saving time.