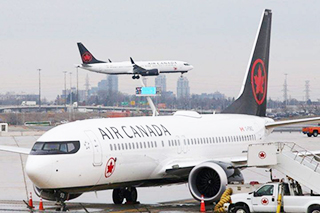 Air Canada has reported impressive Q3 results, overcoming obstacles including the grounding of the 737 MAX and posting operating income of $956 million compared to $923 million in the same quarter last year. The profit numbers were slightly below analyst estimates, but President and Chief Executive Officer Calin Rovinescu had no complaints.

"I am pleased to report an excellent third quarter for Air Canada, in which we generated record operating revenues of close to $5.6 billion and reached record liquidity of nearly $7.4 billion,” said Calin Rovinescu, President and Chief Executive Officer.

“Impressive as such strong results are on their own, they are even more meaningful given that we achieved them despite the serious disruption to our operations and to our cost structure created by the Boeing 737 MAX grounding. Our record performance is a testament to the resourcefulness, skill and dedication of the entire Air Canada team, and I applaud and thank them for their hard work taking care of our customers since the Boeing 737 MAX grounding occurred."

Rovinescu says the airline delivered on key metrics during the quarter, including: EBITDA (earnings before interest, taxes, depreciation, amortization and impairment, as a percentage of operating revenue) of $1.472 billion, an increase of 9% from the previous year; higher operating income; and improved yields.

"Through great effort and teamwork, we have successfully managed through the extremely challenging 737 MAX grounding for nearly eight months now, most recently adjusting our schedule to remove the aircraft until 14FEB, 2020 and wet leasing two Airbus A330 aircraft to ensure we have sufficient capacity this winter. However, the removal of a scheduled 36 737 MAX aircraft during our peak summer season exacted a toll from a financial, route, product, and human resources perspective and the grounding is preventing us from realizing our full potential," said Rovinescu.

"I nonetheless remain confident that if regulators unground the aircraft near-term, our on-going transformation will quickly regain its previous trajectory. For this reason, we have chosen at this time not to adjust our long-term financial targets presented at our last Investor Day. Much of my confidence flows from the professionalism our employees have demonstrated throughout this year since the aircraft was grounded, as well as the strong loyalty shown by our customers, and I thank both groups for their commitment to and support of Air Canada.”

AC says system yield in the third quarter of 2019 actually benefitted from the constrained capacity resulting from the grounding of the Boeing 737 MAX aircraft as well as a generally improved pricing environment, mainly in North America.

Also as of 30SEPT, net debt of $2.999 billion decreased $2.215 billion from 31DEC, reflecting that increase in unrestricted liquidity and a decrease in long-term debt.

For the 12 months ended 30SEPT, return on invested capital (ROIC) was 15.5%, significantly higher than AC’s weighted average cost of capital of 7.2%.

Rovinescu also note that Transat A.T. shareholders approved the definitive acquisition agreement with Air Canada, by a vote of nearly 95% during Q3.

"This overwhelmingly favourable vote underscores the numerous benefits for all stakeholders from the proposed merger, which now remains subject to applicable regulatory approvals and customary conditions."