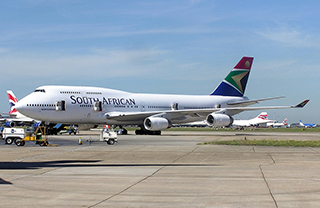 South African Airways says it has signed a wage deal with trade unions on Friday, ending an eight-day strike that edged the cash-strapped state airline to the brink of financial collapse.

In an email to travel partners, SAA said it restored a full flight schedule over the weekend.

It said select cancellations, principally on the domestic network and regional flights, were still occurring on Saturday, 23NOV, but by the next day, services were operating normally across SAA's domestic, regional and international networks.

"We are delighted to be able to announce a resumption in normal schedules. On behalf of SAA, I would like to express our deep regret at the inconvenience caused to our loyal customers during this industrial dispute. We will continue to assist those passengers, that have still not been able to travel, to reach their intended destination as soon as possible," said Philip Saunders, SAA’s Chief Commercial Officer.

"At the same time, I would like to express our commitment to return to the skies with renewed passion and energy to serve all our customers. We also thank our airline partners, Mango, Airlink and SA Express, for assisting us during this difficult period," Saunders added.

According to Deutsche Welle, the National Union of Metalworkers of South Africa and the South African Cabin Crew Association had demanded SAA for an 8% pay rise and wanted to halt plans to cut over 900 jobs of the airline.

On Friday, the unions accepted SAA's offer of a 5.9% wage increase and not going through with the layoffs, ending the week-long deadlock.

SimpleFlying reports that that the airline has been struggling financially for quite some time, having not made a profit for the last seven years, and with losses of almost $500 million for the current financial year.

With this in mind, One Mile At A Time questions whether the airline will be able to financially support its current staffing levels.

"The pay increase as such isn’t the big issue here, but to me the serious problem is the lack of layoffs. The company simply isn’t efficient with how many employees it currently has, and no one is being done a favour by keeping around that many people," it wrote.

DW further reported that government and airline officials are talking openly about selling parts of the airline off to private investors. Ethiopian Airlines and Virgin Atlantic are rumoured to have expressed an interest.