Iberostar To Host Holiday Classic Car Parade 5JAN In HAV 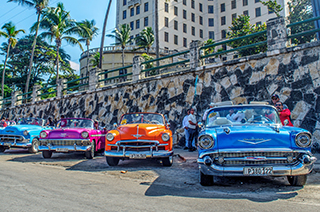 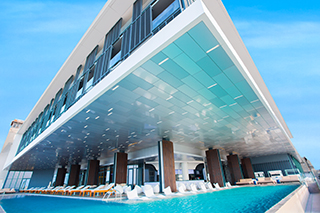 On 5JAN 2020, Havana will play host to the classic cars rally organized by Iberostar Hotels & Resorts Cuba as a tribute to one of the city’s most iconic sights.

The cars will parade along Havana’s Malecón seafront avenue and will pass by three Iberostar hotel locations: the Habana Riviera by Iberostar will be the starting point for the route, followed by a stop at the Iberostar Parque Central before finishing at the Iberostar Grand Packard, the hotel that takes its name from the emblematic classic Packard cars.

Iberostar will award a prize to the best kept car among all those taking part. Last year, more than 120 cars took part in the first edition of the Classic Cuban Car Rally.

As well as a spectacle, Iberostar intends to show off three different perspectives of Havana for visitors, reflected in its hotels in the city.

The Habana Riviera by Iberostar, in a skyscraper affording unique views of Havana’s Malecón seafront avenue, will transport guests back in time to the 1950s. In turn, the Iberostar Parque Central, nestling in the heart of Old Havana, provides a total immersion into life in the city. Last but not least, the Iberostar Grand Packard is Havana’s first ever grand luxury hotel, in a prime location on Paseo del Prado, overlooking El Morro castle and offering a combination of tradition and modernity.

For those who would rather celebrate Christmas and the New Year in flip-flops, the Iberostar Selection Varadero and Iberostar Selection Ensenachos are two choices for clients seeking a Cuban beach holiday. Both hotels boast direct access to the beach, and, especially during the festive season, offer guests a packed entertainment program and special menus with Christmas dishes, as well as live music shows.

On the culinary side, Iberostar says it has “a commitment to offering the same quality standards as in other parts of the world,” at its Cuban properties, not always an easy proposition.

Over the Christmas and New Year period, the company says its hotel buffets will feature a special range of festive fare, with dishes at various hotels including: sirloin beef Wellington with a port wine reduction and tender leaves glazed with almond honey; rack of lamb in its jus; potato and truffle terrine with a red berry sauce; and fish ceviche or tataki with chilled Cordoba salmorejo cream.