Swoop Named ‘Start-Up Airline Of The Year” By CAPA 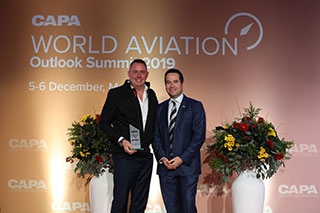 Swoop, the Canadian ultra-low-fare airline and subsidiary of WestJet, has been named winner of the CAPA 2019 Aviation Awards for Excellence nbsp;Start-up Airline of the Year.

Steven Greenway, Swoop President, accepted the award at the CAPA World Aviation Outlook Summit in Malta and delivered a keynote presentation at the global summit.