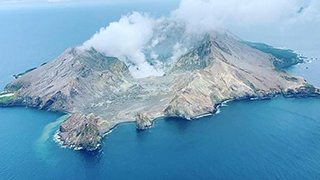 The New Zealand Herald reports that 38 of the 47 people on White Island, New Zealand when its volcano erupted were passengers on Ovation of the Seas taking a shore excursion. In all it is feared that at least 13 are dead – with six confirmed to date -- with a further 31 in the hospital following the second of two eruptions.


Cruise Week reports that local media say that number might climb, as there are no signs of life on the island and several of the injuries are very serious.Meanwhile, relatives of two cruise passengers from the U.S. are expressing their shock and fury to media.A New Zealand Herald headline partly reads, “Parents Livid,” with regards to the Virginia-based parents of a couple who were taking their honeymoon cruise on Ovation and were rushed to the hospital with severe burn injuries.The Washington Post reports that the mother of the bride received a call from Royal Caribbean shortly after midnight asking whether she had heard from her daughter. They explained that the newlyweds hadn't returned to Ovation after the volcano tour and were reported missing.The mother of the groom, meanwhile, received a distressing voicemail from her son in which he said he was living but that they had been on the excursion and had gotten badly burned. He was airlifted to a hospital in Christchurch for treatments of burns covering about 80% of his body. The parents later learned that the new bride was recovering at an Auckland hospital with severe burns and was undergoing surgery.The parents say that part of their anger is based on news that experts had reported increased volcanic activity on the island weeks before Monday's incident and yet the excursion went on.For its part, Royal Caribbean has not confirmed to Cruise Week that this was a company excursion to the island as opposed to an independently operated tour. However, a tour to the island had been offered earlier by Royal Caribbean on its website. In the latest statement Royal said: "We are devastated by yesterday's events. The details that are emerging are heartbreaking.”