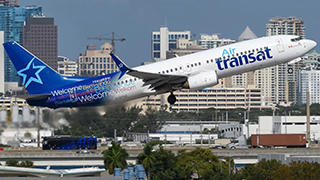 While Transat awaits a decision from regulators on its proposed acquisition by Air Canada, the integrated tourism operator has revealed fourth quarter and full-year results.

For Q4, adjusted operating income was $23.5 million, compared with $6.9 million in 2018, an improvement of $16.6 million. Transat says the increase resulted primarily from higher average selling prices across all programs, and growth in ancillary revenues, partially offset by the costs associated with the transaction with Air Canada and by higher aircraft maintenance costs due to a larger number of maintenance events than last year.

"We're working to obtain the required approvals to complete our transaction, while focusing significant efforts on serving our customers and improving our results," stated Jean-Marc Eustache, President and CEO. "I salute our employees' professionalism which has allowed us to achieve these last two objectives this year."

Transat posted revenues of $693.2 million for the quarter, up $24.4 million compared with 2018. This increase resulted from higher average selling prices across all programs, as well as growth in ancillary revenues.

The increase in operating loss resulted primarily from higher fuel prices, combined with the weakening of the dollar against the U.S. dollar and from the additional costs incurred for the transition and optimization of the Air Transat fleet, which in total exceeded the increase in the average selling prices of packages.

Summer showed much better results, with operating income totalling $15.9 million compared with an operating loss of $3.9 million for the previous year. This improvement was driven by higher average selling prices and load factors across all programs, and growth in ancillary revenues.

The increase in operating income was partially offset by the costs associated with the transaction with Air Canada, amounting to $23.9 million, and by higher aircraft maintenance costs due to a larger number of maintenance events than last year.

Excluding non-operating items, Transat reported an adjusted net loss of $9.4 million for the period ended 31OCT, compared with $24.0 million in 2018.

Transat says the impact of fluctuations in the Canadian dollar, combined with decreased fuel costs, will result in a nil increase in operating expenses if the dollar against the U.S. dollar and aircraft fuel prices remain stable. Margins are currently at slightly higher levels compared with the same date last year.

In the transatlantic program, where it is low season, load factors are tracking 1.6% higher than last winter. Prices are currently up 4.2% from the same date last year.

If the current trends hold, Transat says it expects its results for the winter season to be slightly higher than those of last year.