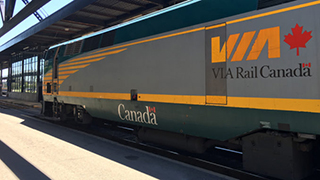 VIA Rail Canada says it is “delighted” that Prime Minister Justin Trudeau has renewed the support of his government for the corporation's High Frequency Rail (HFR) project as outlined in the Minister of Transport, Marc Garneau's mandate letter to pursue the implementation of its Transportation 2030 strategic plan.

"VIA Rail's HFR project is one of the government's priorities within the Minister of Transport's new mandate. Minister Garneau has always demonstrated a profound interest in our proposal and over the years has used the train on a regular basis for his inter-city transportation, along with an increasing number of Canadians," said Cynthia Garneau, President and Chief Executive Officer of VIA Rail.

"HFR is a complex and ambitious collective project that aims to make VIA Rail a greater contributor to a more sustainable and prosperous Canada."

HFR would expand VIA Rail services to more communities between Québec City and Toronto including Peterborough, ON and Trois-Rivières, QC. HFR would operate on a new rail line north of the current service corridor.

"Our modernization is well underway," added VIA’s Garneau. "The VIA Rail team will continue to work with energy and enthusiasm, as we have over the last years, to complete this project efficiently and successfully.”

Since 2014, VIA Rail has seen 32% growth in ridership across Canada, and 34% growth within the Québec-Windsor corridor.