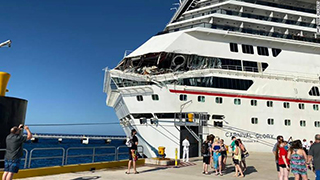 Carnival Glory and Carnival Legend collided this morning while at port in Cozumel, Mexico, causing extensive damage to the starboard side of the stern of the Glory and leaving one passenger with minor injuries.

The Carnival Glory was "maneuvering to dock," and hit the Carnival Legend, which was already docked, the cruise line said. Glory then appeared to come close to striking the moored Oasis of  the Seas, according to an eyewitness who posted updates on his Twitter account.

A now-viral video and photos of the dramatic crash have since surfaced on social media.

In a statement, Carnival Cruises says it is “assessing the damage but there are no issues that impact the seaworthiness of either ship. We have advised guests from both ships to enjoy their day ashore in Cozumel."

Carnival's statement claims that itineraries will not be affected by the crash, but with this much damage to the Carnival Glory's deck, it remains to be seen whether the ship will resume its sailing.

One guest sustained a minor injury as guests were being evacuated from the dining room on decks 3 and 4, according to the company.

A Carnival Legend passenger, Mary Anne McKinley told CNN that "the crash wasn't too bad. Just felt like a big wave crashing into the ship."

"Last night we experienced some major motion on the boat so this morning we assumed something similar was happening," Haynes told CNN. "We felt a jolt and didn't really think anything of it."