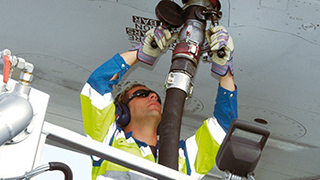 The 108 employees in charge of refueling planes at YUL and YMX may go on strike 31DEC, if they fail to reach an agreement with their employer, Swissport, before tomorrow afternoon.

However, Swissport says it has a contingency plan to ensure the supply of aircraft and that a strike would cause "minimal disruption'' and air traffic would, for the most part, "continue as normal," CBC reports. In the event of a walkout, the company says it may also call on executives to maintain activities.

A tentative agreement between the union and Swissport was reached on 21DEC, but last Friday Swissport Canada issued a statement saying they were unable to strike a deal.

"We are surprised and disappointed with the outcome of today's vote since we have answered the great majority of the union demands. The proposal was fair and included significant improvements in total compensation and work conditions," it said in a statement.

The International Association of Machinists and Aerospace Workers said 90% of its members rejected Swissport's last offer.

Salaries and work-life balance are the main points of contention between the employer and workers, who have been without a contract since AUG.

Swissport Canada is the only supplier of fuel for airlines operating out of YUL and the cargo-only YMX. Its employees are responsible for refueling up to 500 aircraft per day.

Open Jaw is monitoring the situation.