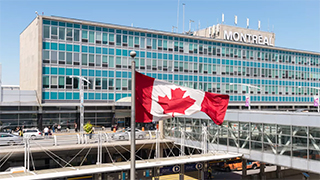 YUL is warning of delays and advising that passengers check their flight status as unionized refuelling personnel launched a strike at 11 a.m. on New Year’s Eve.

“Aéroports de Montréal regrets that passengers at YUL Montréal-Trudeau International Airport find themselves, through no fault of their own, in the midst of a labour dispute between Swissport Fuelling and its employees responsible for refuelling aircrafts,” said Aeroports de Montréal (ADM) in a statement.

The strike, affecting YUL and the cargo-only YMX airports, comes after the Swissport personnel overwhelmingly rejected an offer from management made last week. Salaries and work-life balance are the main points of contention between the employer and workers, who have been without a contract since AUG.

“Since the announcement of a strike, ADM has spared no effort to enable Swissport Fuelling to rapidly deploy its contingency plan, including providing managers with access to restricted zones so that they can ensure the continuation of aircraft refuelling activities at YUL,” ADM continued in a statement.

“The…operations coordination centre is activated and is monitoring the situation 24 hours a day. The Airport patrol and the (Montreal police) have deployed measures to ensure security and the continuity of operations.

“ADM would like to reassure passengers that operations are continuing at the airport, but that the dispute could result in delays in flight schedules. Travellers are advised, as always, to check the status of their flight before coming to the airport.”

Swissport Canada is the only supplier of fuel for airlines operating out of YUL and YMX. Its employees are responsible for refueling up to 500 aircraft per day.