OJ ON LOCATION: “Historic Moment For Air Canada” As It Welcomes First A220-300

Open Jaw travelled to Air Canada HQ in Dorval, Quebec, for the long-awaited debut of the airline’s first A220-300.

Open Jaw will be aboard the first revenue flight for the A220-300 tomorrow.

It was a special day for AC, for Quebec and for Canada’s aviation industry, as this plane is a “clean-sheet design” conceptualized and built in La Belle Province, with parts supplied from more than 30 Canadian manufacturers.

“This is a historic moment for Air Canada as we welcome the A220 into our fleet,” said CEO Calin Rovinescu, who was honoured by having the plane named after him – the designator is ‘C-GROV.’ 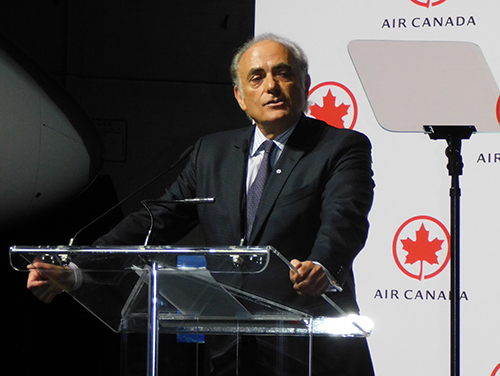 Air Canada CEO Calin Rovinescu welcomes the A220-300 into the Air Canada fleet.


“I am especially pleased today because Air Canada was the first North American carrier to place a firm order, helping the model to survive and keeping Canada on the leading edge of aviation development. We are very proud to have paved the way for orders from other major carriers.”

The A220 – which as Rovinescu noted was formerly known as the Bombardier CSeries before its acquisition by Airbus -- is a single-aisle plane with a 5,900 km range. It delivers major benefits in fuel burn and reduced emissions, and is described as “the perfect size for the single-aisle market.” 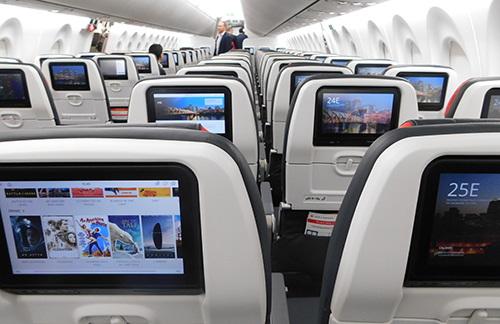 For passengers, the A220-300 offers tangible benefits too, including, at 19 inches, the widest economy seats in the Air Canada fleet. Overhead bins are more spacious than previous aircraft and windows much larger. As well, every economy seatback features a Panasonic inflight entertainment system with a 12-inch screen.

Mark Galardo, Air Canada’s Vice President, Network Planning, played a key role in evaluating the aircraft and recommending its purchase. He describes the A220 as giving AC an “unbeatable competitive advantage.”

“We needed planes in the 130-140-seat range, and this plane stood head and shoulders above any competition,” Galardo told Open Jaw. 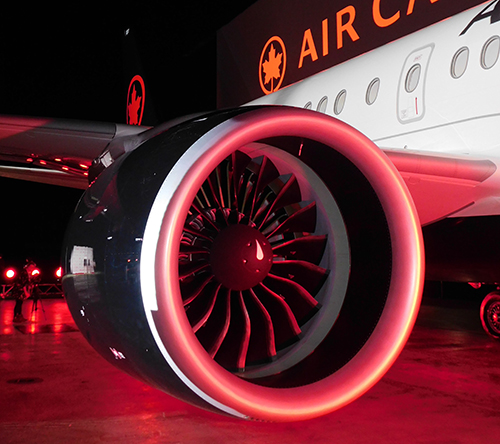 The Pratt & Whitney turbofan engines on the A220 deliver 20% less fuel burn per seat.

When it’s first revenue flight departs YUL for YYC Thursday morning, AC will become the first North American airline to fly the A220-300 variant. Delta is also using A220s, but the smaller A220-100 version. And JetBlue has 60 A220s on order.

Air Canada says the A220 is the best choice in the market for serving secondary destinations in the United States or major cities outside of peak hours.

The airline previously announced two new routes that will be operated using the aircraft – YUL-SEA and YYZ-SJC, both launching in MAY. In addition to the two new routes, the A220s will fly between existing pairs, such as YUL-YYC, YYZ-YEG and YUL-YYZ. It will also boost capacity on routes like YUL-LGA. 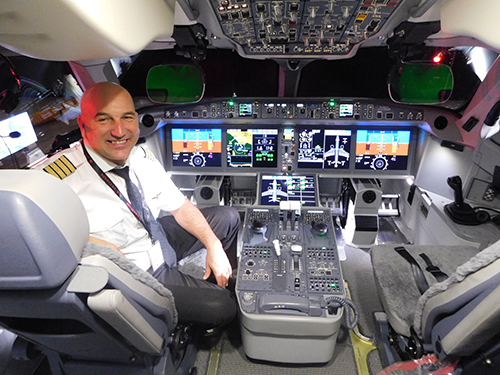 A look inside the A220 flight deck.

Airbus Chief Commercial Officer Christian Scherer was on hand for the event, and he praised Bombardier’s work on the design. “I love this plane,” he said. “It sells itself. Many happy landings to Air Canada with the Maple Leaf on the tail.”

Open Jaw will get a chance to experience the A220-300 in flight tomorrow, with Editor-in-Chief Bruce Parkinson joining the inaugural revenue flight from YUL to YYC. Look for a firsthand report on the experience in the coming days.