For me, the first indication that Air Canada’s A220-300 offers an improved passenger experience came when I made my first trip down the plane’s single aisle.

There was no need to do the familiar, slightly sideways, crab-like shuffle, dragging your second leg behind you, to avoid bumping elbows and armrests. That’s because the armrests have been trimmed, giving a full 20 inches of aisle-width. It makes a big difference. 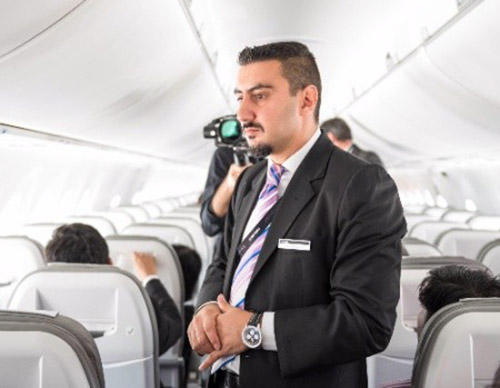 The luxury of space on the A220 is noticeable in the window seats too. The walls of the fuselage are more vertical, instead of curving in more and eating up window seat space. As well, the placement of the larger windows allows everyone in the 3X2 economy seat configuration to be able to get a look outside.

At 19 inches, the width of the A220 economy seats – all of them – is the largest in the AC fleet. And that extra inch or so makes a huge difference. The slim-line seats are surprisingly comfortable too. 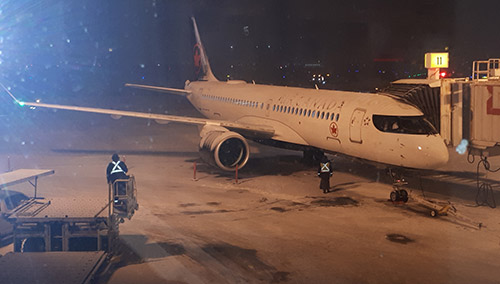 Built in Canada, ready for Canadian winter: snowy conditions in YUL
made for an ideal first revenue flight test.

“There are so many little differences and innovations that add up to a big improvement in passenger experience quality,” Raymond Manougian told Open Jaw during a conversation on the flight. He is the Single-Aisle Family Product Marketing Director for Airbus Canada.

Manougian was savouring Air Canada’s A220-300 inaugural revenue flight along with colleague Annabelle Duschesne, who handles A220 Product Communication & Media Relations. Both were with Bombardier -- the original developer of the aircraft -- for years, so the flight was a proud moment for them. 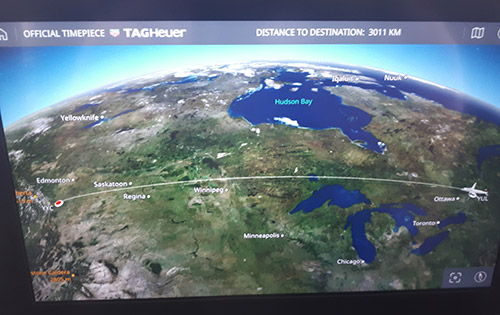 “Opportunities only come every 20-25 years to create a clean-sheet design plane. And Bombardier and now Airbus have created an aircraft that pleases everyone – pilots, crew, passengers – even the airline finance department, because this is a plane that will make money,” Manougian said.

Duschesne and Manougian say the integration with Airbus was “seamless” following the acquisition of what was previously the Bombardier CSeries aircraft.

“There was mutual respect and a similar culture. And management today is a real mix of Bombardier veterans and Airbus executives from Toulouse. Airbus really loves this aircraft and that has made integration easy,” Manougian said.

Configured with 12 business class and 125 economy seats, the Air Canada A220-300 will play a key role in enabling Air Canada to expand into secondary markets, feed connecting hubs and offer an efficient alternative for off-peak hours on busy routes. There are 45 of the planes on order, with options for 30 more. 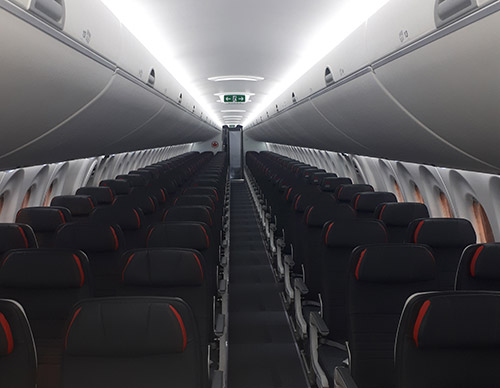 Two more things stood about the A220-300 during the inaugural experience. The 12-inch Panasonic seat-back inflight entertainment screens offer a great picture, easy navigation and plenty of entertainment choices. The interactive flight map is highly detailed and many pax appeared to spend quite a bit of time looking at it.

The other major point of differentiation is inflight noise. After landing late in Calgary due to a de-icing backup at YUL, I had to run through YYC hoping to make it onto the AC Boeing 777 that would take me home to Toronto. I just made it, and we were soon taxiing out to the runway. 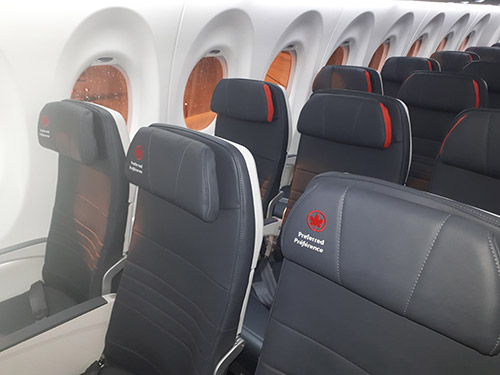 Slimline and 19” wide, the Air Canada A220-300 seats are remarkably comfortable.

I likely wouldn’t have noticed it had I not just got off the A220, but the 777 seemed really loud in comparison. And the much bigger, 10-abreast ‘densified’ plane also felt much more cramped, both in terms of seat width and the number of times my aisle-facing elbow was hit by carts, crew and fellow pax.

Bottom line: Air Canada and the other carriers who followed its lead in purchasing this shining example of Canadian engineering and ingenuity are going to make a lot of passengers happy.