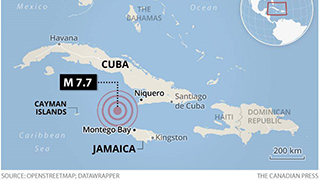 A powerful magnitude 7.7 earthquake struck in the Caribbean Sea between Jamaica and eastern Cuba on Tuesday. Witnesses reported strong shaking but there was no immediate word of casualties or heavy damage.

A tsunami warning was issued for the coasts of Cuba, Jamaica and Mexico as buildings were evacuated and citizens told to move away from the shoreline. The warning said waves up to a metre high are possible along the coasts of Belize, Cuba, Honduras, Mexico, Jamaica and the Cayman Islands.

The quake was centred 139 kilometers northwest of Montego Bay, Jamaica, and 140 kilometers west-southwest of Niquero, Cuba. It hit at 2:10 pm and the epicentre was a relatively shallow 10 kilometres beneath the surface.

On social media there is evidence of damage to roads in Jamaican and the Cayman Islands, and videos of water slopping out of swimming pools.

One Canadian guest of a Royalton property in Negril tweeted that everything was fine and showed a picture of himself on the beach. Responses urged him to seek higher ground in case of a tsunami.