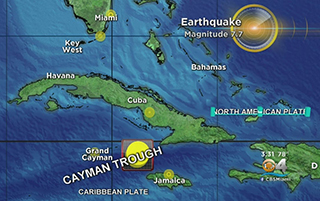 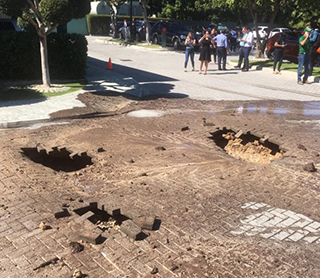 Sinkholes in roads and yards were seen in
Cayman Islands and Jamaica.

The Caribbean region dodged a big bullet yesterday when a powerful magnitude 7.7 earthquake struck in the Caribbean Sea between Jamaica and eastern Cuba. Residents and visitors were shaken up by strong movement, but despite road damage and minor infrastructure disruption, there have been no casualties reported.

A tsunami warning was issued for parts of the coasts of Cuba, Jamaica, Belize, Cayman Islands, Honduras and Mexico, with buildings evacuated and citizens told to move away from the shoreline. But that threat passed without incident.

The quake was centred 139 kilometers northwest of Montego Bay, Jamaica, and 140 kilometers west-southwest of Niquero, Cuba. It hit at 2:10 pm and the epicentre was a relatively shallow 10 kilometres beneath the surface.

“I know people are very concerned and alarmed and there has been some structural damage including at my own house,” said Cayman Islands Premier Alden McLaughlin.

“It is with a deep sense of gratitude that I say it doesn’t appear as if anyone has been hurt and we have been spared the worst of what could have been a truly devastating ordeal.”

Dr. Enrique Arango Arias, head of Cuba’s National Seismological Service, told state media that there was no serious damage or injuries reported and that airports on the island are operating as usual. The Hon. Edmund Bartlett, Jamaica’s Tourism Minister, told media that the quake “definitely shook me by surprise,” but there were “no reported damages so far and all is well.”

The tremor was felt as far away as Miami, where some office buildings were evacuated.