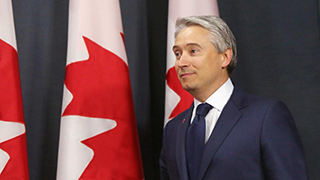 The Canadian government has chartered a civilian passenger plane to repatriate about 160 Canadians from China as the novel coronavirus continues to spread, Foreign Affairs Minister François-Philippe Champagne said Wednesday.

Champagne said federal officials are working with Chinese authorities to secure the necessary authorizations for the plane to land in Wuhan, the Chinese city where the virus is believed to have originated, as well as working out the logistics of how the repatriation would proceed.

Wuhan, a city of nearly 11 million inhabitants, and two of its prefecture-level cities have been under lockdown since 23JAN.

Although officials did not clarify whether any of the Canadians in China who have now requested consular assistance are displaying symptoms of the virus, federal Health Minister Patty Hajdu said the government still has to decide what will happen with the Canadians who leave China, so as to prevent any spread of the illness.

“Will people be allowed to come back if they’re sick? These are the conversations we’re having," said Hajdu.

She added that officials are looking at the possibility that the repatriates could be housed at a military base for quarantine.

“The first and foremost thing to remember is that we will always work to ensure the health of Canadians whether they are abroad or whether they are here,” Hajdu said. “So, yes, what we’re looking at is a scenario where we all the measures in place to protect Canadians from exposure to the virus.”

According to Champagne, it could take “a number of days” before all the legal and logistical hurdles are overcome for the plane to gain clearance.

About 250 Canadians in the province of Hubei -- of which Wuhan is the capital city -- have registered with Global Affairs Canada, officials said. However, Canada has no consular presence there.

The announcement came as the government issued an updated travel advisory for China, urging Canadians to avoid all "non-essential" travel to the country, and Air Canada announced a temporary suspension of all direct flights to Beijing and Shanghai.

The novel coronavirus has killed 132 people and infected more than 6,000 on the Chinese mainland and abroad, surpassing the number in that country who contracted SARS during the 2003 outbreak.