Seven Canadians Among 61 Positive For Coronavirus On Diamond Princess 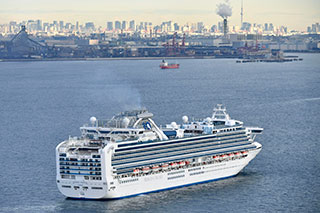 Meanwhile, Holland America has cancelled the 15FEB sailing of the Westerdam. In a statement earlier, the line said, "Holland America Line has been notified that the Japanese Government will not permit Westerdam to call in Japanese ports.

"The ship had been scheduled to call to Ishigaki Island, Naha, Okinawa, Nagasaki and Fukuoka (Hakata), before its scheduled turn in Yokohama on 15FEB, where the next cruise was scheduled to embark.

"The ship is not in quarantine and there are no known cases of coronavirus on board."

As Cruise Week reports, the rapidly evolving situation is creating significant limitations for where ships can go in Asia. Off-limits calls now include all ports in Japan and Taiwan, Shanghai, and apparently Hong Kong (though not officially confirmed) and apparently the Philippines (again no official word).

Although it does not appear to be blanket ban, it's clear several ships are being kept from calling in HK and the Philippines. For instance, Seabourn Ovation did not make a scheduled call in Manila on 5FEB, calling in Thailand instead.