Air Italy To Cease Operations 25FEB As Losses Pile Up 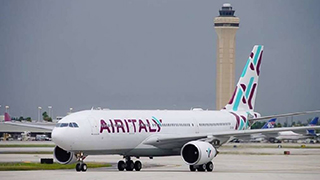 Less than two years after launching its first flight, Italian airline Air Italy has announced it will cease operations on 25FEB and liquidate.

IG had been scheduled to launch 6X- weekly flights between its hub in Milan and Toronto beginning 29MAR.

The airline is closing in an orderly fashion, promising that pax with flights after 25FEB will receive refunds. Those scheduled to travel before that date can also request a refund instead of travelling.

Air Italy is advising passengers from Canada to call 1-800-746-1888 for information on refunds if they booked directly, “or by contacting the travel agency in the case of purchase through this channel.” An email address was supplied -- refunds@airitaly.com.

The IG collapse comes early in 2020, after a 2019 blemished by high-profile airline failures including Wow Air, Thomas Cook, Jet Airways and XL Airways.

Air Italy was the product of a rebranding of legacy Italian regional carrier Meridiana. Qatar Airways acquired a 49% stake in Meridiana in 2017, rebranding as a long-haul airline with Milan Malpensa airport as its hub.

Air Italy had 20 737 MAX aircraft in its fleet for regional connections out of Milan Malpensa, but those planes have been grounded since MAR 2019, putting a major crimp in its flight schedule. For long-haul flights, Air Italy leased A330 bird from QR.

In a statement, Qatar Airways suggested that the airline's other owners were unwilling to continue operating at a loss:

“Since the acquisition…Qatar Airways has strongly believed in the company and in its potential, supporting management's proposed business plan with a view to improving Air Italy's growth and job creation, with the addition of long-haul routes and numerous in-flight service improvements, in line with Qatar Airways' globally renowned high standards.”

QR says that despite its role as a minority shareholder, it “has continuously provided all possible support to Air Italy right from the beginning, from releasing aircraft from our fleet and ordering new aircraft for Air Italy, to backing management choices and injecting capital and investment as required and permitted.”

Qatar was unable to increase its investment or inject cash into Air Italy due to European Union laws, which limit foreign ownership of companies to a minority stake.

The collapse of Air Italy comes as the Italian government seeks a buyer for Alitalia, which was put into special administration in 2017. In bankruptcy protection for the second time ina a decade, AZ is surviving on a government bridge loan.