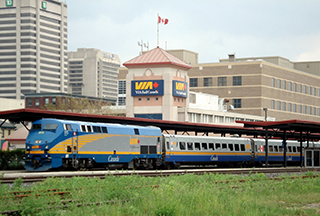 Blockades created by anti-pipeline protesters have forced CN Rail to shut down its entire Eastern Canada network. In a ripple effect, Via Rail has cancelled passenger trains nationwide, with just two routes left in operation.

“Following a notice from the infrastructure owner, CN Rail, that it is no longer in a position to fulfill its obligations under the Train Service Agreement between VIA Rail and CN Rail, VIA Rail has no other option but to cancel all of its services on the network with the exception of Sudbury-White River (CP Rail) and Churchill-The Pas (Hudson Bay Railway), until further notice,” a VIA Rail statement said.

“We started informing passengers earlier this afternoon that there will be no more train departures. Upon infrastructure owner instructions, all VIA Rail trains currently en route will be able to reach the closest major train station.”

Via Rail relies on CN Rail’s tracks. CN has won court injunctions to end the blockades, but it will take law enforcement action to make that happen, with timing uncertain. So the company announced yesterday that it will progressively shut down Eastern Canada operations “until the illegal blockades end.” CN says that also means suspending all transcontinental trains across its Canadian network.

A note on the VIA Rail website reads: Important Advisory: Please note that it is currently not possible to make a booking to travel before February 21.

“We understand the impact this unfortunate situation has on our passengers and regret the significant inconvenience this is causing to their travel plans,” the VIA Rail statement said.

Status updates can be found here.