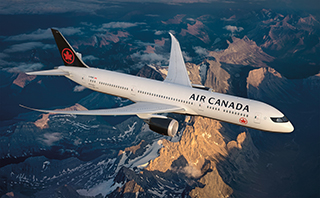 Air Canada missed analysts' estimates for quarterly profit as it announced Q4 and full-year 2019 financial results, but the story for the airline is still a positive one, as it battles through the turbulence of the MAX grounding and the coronavirus outbreak.

The company reported an adjusted net income of $47 million for the fourth quarter ended 31DEC, lower than $55 million a year earlier. Part of the small decline can be attributed to higher maintenance costs on maintaining older aircraft amid the grounding of the 737 MAX. AC had expected to expand its fleet of 24 MAX jets to 50 by mid-2020. Instead, the MAX won’t likely fly again until at least Q3, and AC has projected an increase in maintenance expenses of $150 million in 2020.

"I am very pleased to report strong fourth quarter and full year results for 2019, a year in which we generated record revenues in excess of $19 billion and reached record levels of unrestricted liquidity, despite the loss to Air Canada of approximately 25% of our narrow-body fleet for most of the year following the worldwide grounding of the Boeing 737 MAX,” said Calin Rovinescu, President and CEO.

The 2019 results continue a run of success for Air Canada – and will put a smile on the faces of investors. AC earned an 87% return on its shares in 2019, and the carrier has been the top performing stock on the Toronto Stock Exchange for the past decade, with a 3,575% return over that time.

"The agility and consistency that we displayed in 2019 gives me confidence that we will successfully execute on the several key opportunities now before us,” Rovinescu said.

“This includes the launch of our new loyalty program later this year, which we expect will be the best airline loyalty program in the world. We also look forward to completing our proposed merger with Transat A.T., which was approved by nearly 95% of Transat shareholders last summer and now remains subject to applicable regulatory approvals.”

It’s not all clear skies ahead, as AC opens 2020 in an atmosphere of uncertainty due to the ongoing Boeing 737 MAX grounding, as well as emerging economic and geopolitical risks and route suspensions resulting from the COVID-19 virus.

But Rovinescu says a strong balance sheet, globe-spanning network with diverse revenue sources, young fleet and an energized workforce and management will enable AC to respond to challenges.

Looking ahead, Air Canada's 2020 first quarter and full year outlook in relation to both EBITDA and ASM capacity growth assumes that mainland China and Hong Kong services will be fully recovered by Q3 2020 and that the Boeing 737 MAX aircraft will gradually return to service commencing late in the third quarter of 2020.

Without the MAX and due to service suspensions to mainland China and Hong Kong, Air Canada expects first quarter 2020 EBITDA to be approximately $200 million lower than the first quarter of 2019.

For the full year 2020, Air Canada projects an EBITDA margin of approximately 19%, which would result in a small increase in EBITDA versus the reported EBITDA of $3.636 billion in 2019.