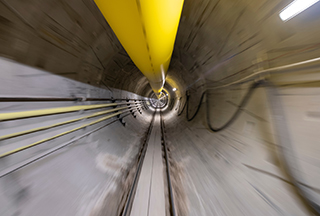 A view inside the Boring Company “people mover” tunnel, under construction beneath the Las Vegas Convention Center.

Elon Musk's The Boring Company has completed drilling the first of two vehicular tunnels that will be part of the Vegas Loop – an underground transportation system located beneath the Las Vegas Convention Center and designed to transport convention attendees throughout the 200-acre campus.

After tunneling 12 metres underground for some 1.5 kilometres over the past three months, the boring machine finally broke through the concrete wall located near the West Hall convention centre expansion, currently under construction, signalling the official completion of excavation for the first of two one-way tunnels.

The $70 million underground transportation system is expected to move up to 4,400 convention attendees per hour and is scheduled to debut to the public in JAN 2021.

There is also potential for expansion in the future to ease congestion throughout the Las Vegas resort corridor.

Next, the machine will be disassembled, transported via trucks and lowered back into the launch pit where it will begin boring a parallel path adjacent to the first tunnel.

“This marks an important milestone in the future of transportation,” said Steve Hill, Las Vegas Convention and Visitors Authority CEO and president.

“Las Vegas is proud to lead the way as the first and only destination to offer an underground transportation solution for moving visitors throughout our convention centre.”