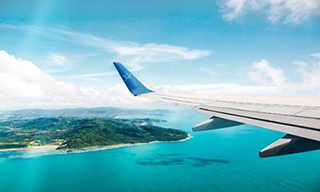 Cayo Largo del Sur airport is closed until 26FEB, the Canadian Embassy in Cuba announced yesterday. While a reason was not cited, several reports on social media websites suggest that a damaged runway – likely due to a sinkhole -- is the reason for the closure.

"Travel to/from Cayo Largo has been cut short," the embassy said. Canadians planning to travel to Cayo Largo del Sur must confirm their flight plan with their travel agency before leaving. ”

The embassy also said that Canadians on site should contact their operator to return to the mainland by sea.

The problems started on 16FEB, when Air Transat informed Transat and Hola Sun customers on the ground in Cayo Largo that their flight would be unable to depart, and that it was working with Cuban officials to arrange alternative transportation – a ferry to the mainland, where Transat would dispatch an aircraft.

However, in a letter to clients, Transat stated that the Cuban government informed them that ferry service would be closed through 18FEB, with service resuming today.

“We truly hope to be able to finalize arrangements with them for a departure on 19FEB,” Transat said in the letter.

That appears to be the reality, as Facebook user ‘Chrissie Mc’ posted the following:

“February 19th... Bus leaving Sol Cayo Largo at 1:30 pm. Bus to take us to airport first, then ferry. Ferry to leave Cayo Largo at 4:00 pm arriving in Batabano at 8:00-8:30 pm where we will be taken by coach to Havana Airport. Our flight is Transat flight TS883 (currently not posted online anywhere as I believe it is only open to our group). Flight departure from Havana -- 11:45 arriving in Toronto airport (YYZ) Thursday Feb 20 @ 3:25 am.”

One online report said that 180 Canadians would be travelling on a catamaran from the island today.

While some stranded travellers complained online about inconvenience and poor communications, others, like Kate Nicholls Joakin, took to Facebook to, well, gloat about their troubles.

She wrote: “Have an extra day in Cayo Largo...flight cancelled due to hole in runway so they have to fix it. Only one runway at island airport. So have to tough it out by the pool and beach...oh darn. Drown my sorrows in mojitos.” 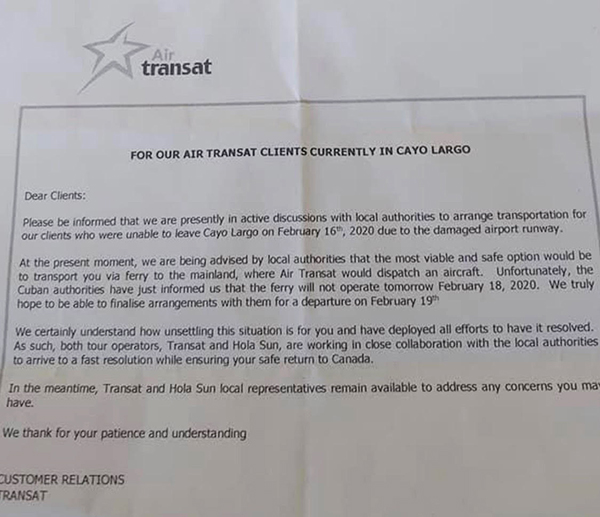