VIA To Temporarily Layoff 1,000 Employees, Resumption Of Routes In Flux 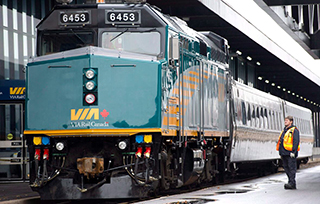 Despite plans to resume partial service on parts of its trans-Canada network, VIA Rail says it has "no choice" but to issue temporary layoffs for "close to" 1,000 employees amid the ongoing pipeline blockades.

"Until CN Rail opens the remaining tracks for service, VIA Rail has no choice but to continue the cancellation of its services on a large part of its network," a VIA statement read.

On 18FEB, VIA Rail had announced resumption of partial service between Québec City-Montréal-Ottawa, and regular service in Southwestern Ontario (Toronto-Sarnia-Windsor-London-Niagara Falls) beginning today.

The Southwestern Ontario service is set to resume as announced, barring any new disruptions. But due to a new blockade near St-Lambert, Québec, VIA says it is unable to resume services between Montréal and Québec City.

As a result of the disruptions, VIA will issue temporary work suspensions to 1,000 of its employees.

"This general interruption is an unprecedented situation in our history. In 42 years of existence, it is the first time that VIA Rail, a public intercity passenger rail service, has to interrupt most of its services across the country," said Cynthia Garneau, President and Chief Executive Officer.

"Since the beginning of the crisis, we have been closely working with the infrastructure owner (CN Rail) in order to formulate a progressive, safe and orderly resumption plan. We have done everything to mitigate the impact on our employees and our passengers. At this point, we believe we have made the fairest and most reasonable decision with the proposed temporary suspension plan. I would like to thank all our union partners for their collaboration and comprehension."

As of 19FEB, 599 trains have been cancelled because of the anti-pipeline protests that have sprung up across the country. More than 111,000 passengers have been affected, according to VIA.