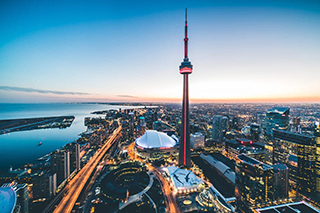 Toronto has once again set a new visitor record with 28.1 million visitors in the city, topping 2018's 27.5 million visitors. Visitors spent $6.7 billion in the destination in 2019, including restaurants, attractions, transportation, retail and accommodations - nearly $200 million more than in 2018.

"Toronto's visitor economy continues to be an economic engine for the city, and that benefits all of us. This is a sector of Toronto's economy that supports 70,000 jobs and 10,000 new jobs over the past 10 years. It generates billions in tax revenue for all three levels of government and drives growth in the overall economy for the city, the region and the province," said Scott Beck, President and CEO of Tourism Toronto.

China remains Toronto's largest overseas market with 222,000 visitors. Despite declining 5.4% in 2019, visits from China have increased 24% over five years. Toronto also continues to see strong growth from the Mexican market, welcoming 64,000 visitors in 2019, representing a five-year growth of 146%.

The Toronto region as a whole saw 45.4 million visitors and $10.9 billion in visitor spending, both new records. The strong result comes on the heels of Destination Canada releasing Canadian visitor numbers announcing a record 22.1 million international visitors and $104.9 billion in tourism expenditures in 2019.

"Visitors to Toronto come from all over the world, during every season and for many different reasons. It's a reflection of Toronto's own diversity," said Beck. "We're a city where more than 50% of our population was born outside of Canada. We're a city that's the Canadian epicentre of culture, entertainment, sports, technology, finance, education and business. The diversity of our visitors showcases our own diversity and we're thrilled to welcome more and more of those diverse visitors every year."

Toronto's business events industry continues to be a thriving component of the overall visitor economy. In 2019, Nearly 574,000 delegates attended meetings, conferences and events stemming from the city's 1,124 total meetings. The economic impact for meetings in Toronto in 2019 reached a record $1.24 billion.