VIA Rail Nearly Back On Track After Weeks Of Disruption 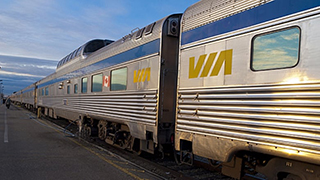 After weeks of disruption by anti-pipeline blockades, services at VIA Rail Canada are nearly back to normal. VIA Rail reports that as of Saturday, 7MAR, most of its trains will resume service on their normal schedule. As well, most of the 1,000 staff temporarily laid-off are being called back.

All services between Toronto-Montréal and Toronto-Ottawa will be offered, with the exception of trains 45 and 655, which will be resuming the day after on Sunday, 8MAR.

Furthermore, VIA Rail confirms that the Canadian, which resumed operations with a first departure on 4MAR, is now back to its full and normal schedule.

VIA Rail service on the Prince-Rupert – Prince-George – Jasper route remains suspended at this time as VIA Rail continues to work with the infrastructure owner, CN Rail, on a resumption timeline.

As a result, VIA Rail will continue to call back the vast majority of the 1000 employees affected by the temporary suspensions announced on 19FEB.

All current reservations on those segments will be protected.

“As we begin to resume all of our operations, our services may take some time to get back to normal. We may experience trip delays and late departure times (passengers are encouraged to visit our website before they leave), our seat availabilities may be limited, and the wait time to speak with an agent on the phone might be longer than usual,” VIA Rail says in a statement.

Due to this, travellers will be able to cancel or modify their reservation at any time prior to departure during the month of MAR without incurring any service fees. This includes all travel up to and including 31MAR, 2020 and any travel after 31MAR if their outbound train is on or before 31MAR.