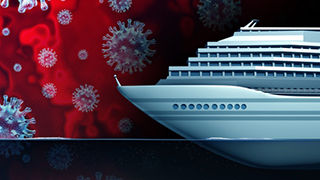 Canada’s Chief Public Health Officer has doubled down on a weekend warning that Canadians should “think twice” about getting on a cruise ship. At a news conference today, Dr. Theresa Tam told Canadians to avoid travelling on all cruise ships in order to prevent the spread of COVID-19.

“Today the Public Health Agency of Canada is recommending that Canadians avoid all cruise ship travel due to COVID-19,” Tam said.

The update comes as Canada prepares to repatriate 237 Canadians aboard the Grand Princess, which is scheduled to dock in California later today.

Tam pointed out that six of Canada’s confirmed cases are connected to individuals from the first leg of the Grand Princess’ voyage, between 11-21FEB.

“The virus can spread quickly onboard cruise ships, due to the close contact between passengers,” Tam said, adding that ships may sail to areas with confirmed or undiagnosed cases.

On the weekend, the U.S. Department of State made the recommendation that travellers – particularly those with existing health issues -- “should not travel by cruise ship.”

Do you think the advice from Canada’s Chief Public Health Officer that Canadians should avoid all cruise travel is justified by the current situation?

Trish - March 10, 2020 @ 15:58
I agree with Marianne!! I just got off the Expolorer of the Seas on March 1st and I have NEVER Seen so much attention to cleaning, disinfecting in my life...INCLUDING our Hospital!!! At night when I couldn't sleep and had emails from Clients I would go down to the Promeanade for coffee and saw a whole crew sanitizing walls, roofs, floors, tables, chairs, ect. It was BUSY and i felt SAFE!! I have a Autoimmune disease and I came back healthy while my husband had a cold from the 67 degree heat difference on day 1 and my daughter & i had a ear infection from 20 hours of flying. AC wasn't clean!! My daughter pulled out the Wipes and it was gross!!!! We kept using the Hand Purifier constantly!! Everyone was coughing, sneezing, NOT into their sleeves!!
I think the GOV'T of CANADA needs to look at the Airports, Planes, ect....NOT the Cruiselines. Do you notice its not any of the Royal Caribbean, Celebrity ships or even Carnival or Disney that are having issues??? Marianne - March 10, 2020 @ 10:09
Very irresponsible for them to make a blanket statement when it clearly was the Japanese health official that mistakenly created this problem.. it is not rocket science to understand that putting people in port, with recirculating air and confining them to their rooms is going to cause a problem... even if no virus is lurking around... when the cruise ship is in motion... new fresh air from movement is healthier... sea air is healthier as is.. and the sickness probably came from shore ... not the ship itself... and targeting the cruise industry is also irresponsible and total unsuitable... airplanes are more likely to cause illness than a cruise ship... obviously they have never been on a cruise and have no idea... just parroting what they think they are hearing...because they have nothing better to say... and cruise ships are very, very clean and safe... no question about that... I have some nervous clients to be sure... but so far, no cruise cancellations yet.. but I am sure they will come rolling in with idiot remarks of doom and gloom like that... it would be better if everyone shut the media down for at least 24 hours and get a grip ... and stop the dramatizing of it all.... I am, however, now getting bus tour cancellations today .. so another avenue for the Minister of health to attack...public transportation and bus tours... lovely...!! Claude Lapointe - March 10, 2020 @ 08:13
I think this is not responsible on the government's part. They should think of all the calls we will get asking for refunds. They should have done their homework and see what the cruiselines are offering as options., not just say, "do not cruise, you may lose your money..." Ann Shaw - March 9, 2020 @ 20:59
No, they should focus on the ships that the virus is on and not put panic into the public not to cruise, its unfair to everyone involved, the cruise line, the clients and the travel agents are losing money because they put fear into peoples mind to panic, they should focus on people with pre-existing respiratory condition and the elderly, it should never be addressed to the public, people work hard and need their vacation. tamara macintosh - March 9, 2020 @ 19:05
If your not healthy, then YES, otherwise take the necessary precautions, wash, wash, wash your hands, I think sitting in an aircraft for 8hrs with no fresh ventilation is worse, Targeting the cruise lines is unfair,
Dr Tam has said nothing about the quality of the air that you breathe on an aircraft ? especially on long flights. donnalea madeley - March 9, 2020 @ 19:01
No!!!!!!!!!!!! Include more comprehensive details of those who are the most vulnerable (as noted in Robin's comments) instead of blanket statements that equate all cruises are equal threats which increases travelers to panic and be fearful. This is not in anyone's best interest. Consideration to the itineraries and the connection to the 2 ships should have been given greater importance. I just returned from a cruise and the cruise line was very proactive! Richard Daniels - March 9, 2020 @ 18:29
Definitely not, no, zilch, zero. In 2017, 61,000 Americans died from influenza. Influenza affects a billion people a year and half a million die from it. Where is the hysteria over that? Tom - March 9, 2020 @ 17:46
One component of the travel industry should not be targeted! What about air travel? Airports have millions of people going through airports daily! If air travel is shut down where would the world economy be!! I believe the cruise industry is being used as a scapegoat! Mary Maidment - March 9, 2020 @ 17:10
Add "immediate cruise travel" or the next 2-3 months...many book their cruises 4 -18 months in advance so this is unfair to the passengers & especially cruise industry. .. & spreading panic D Ference - March 9, 2020 @ 16:27
No as there are hundreds of cruise ships out there and there was only a couple with the virus and that was before all the increased screening and precautions have been put into effect Robin Leblevec - March 9, 2020 @ 16:22
If you have a pre-existing respiratory condition and/or are elderly with a low immune system it would be a good choice to rebook at a later time. I have 27 families booked for an upcoming cruise this Sunday from LAX and to the Mexican Riviera, so far only 2 have cancelled, the rest are in need of a vacation and will be diligent with hand washing. Cruise ships are a very clean environment, people need to be more mindful of their own germs and health practices they o beat avoid catching any flu bug. We are staying positive and praying a fun festive healthy cruise ahead.