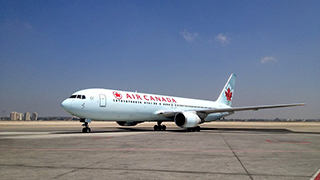 The coronavirus outbreak could cause a 15% drop in Air Canada's revenue and plunge the airline in a deficit in 2020, reports JournalDeMontreal.

"With the suspension of all non-essential business travel at several large companies and the cancellation of major events around the world, not to mention likely reduced demand for leisure travel, we predict that Air Canada will experience an acute disruption in demand in the second quarter and that the impacts will last until the end of 2020," wrote Cameron Doerksen, an analyst with the National Bank Financial on Monday.

Yesterday Air Canada announced that it is temporarily suspending all flights to Italy. That's in addition to certain routes being suspended to China, South Korea and Japan over recent weeks.

Doerksen predicts that overall, AC will reduce capacity by 20% in Q2, and by 10% in Q3, which covers the summer period.

That could decrease the carrier's 2020 revenues by $3 billion and operating profit by $1.4 billion, Doerksen estimates.

According to IATA, the current outbreak could plummet global airline revenues by more than US$100 billion, which would represent a decline of 13.5%. This is more than after the attacks of 11SEP, 2001, but less than after the financial crisis of 2008-2009.

However, Doerksen points out that Air Canada "is better equipped to deal with a crisis than at any time in its history."

At the end of 2019, the carrier had almost $5.9 billion in cash, up from $3 billion three years earlier. Also, more than one-third of its main fleet is debt free, allowing it to ground the planes without incurring too much cost. Finally, the fall in oil prices will allow Air Canada to save money.

"Once the threat of COVID-19 begins to subside, we anticipate that Air Canada will boost traffic with lower fares," he said.