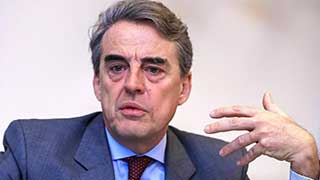 IATA says it supports the extreme measures governments are taking in efforts to contain the spread of COVID-19. But the global airline association says it is going to need support too, "in this time of extreme pressure on the industry."

IATA is urging governments to:

The calls come in response to the U.S. government's banning of non-U.S. citizens, and individuals who are not legal permanent residents of the U.S., who have been in the Schengen Area in the past 14 days from entry into the United States.

"These are extraordinary times and governments are taking unprecedented measures. Safety -- including public health -- is always a top priority. Airlines are complying with these requirements," said Alexandre de Juniac, IATA's Director General and CEO.


"Governments must also recognize that airlines—employing some 2.7 million people—are under extreme financial and operational pressures. They need support."

When taking such measures, IATA urged governments to prepare for the adverse economic impact that they will cause. "The dimensions of the U.S-Europe market are enormous," IATA says.

In 2019, there was a total of around 200,000 flights scheduled between the United States and the Schengen Area, equivalent to around 550 flights per day. There were around 46 million passengers (roughly equivalent to 125,000 travelers every day).

"Governments must impose the measures they consider necessary to contain the virus. And they must be fully prepared to provide support to buffer the economic dislocation that this will cause," said de Juniac.. "In normal times, air transport is a catalyst for economic growth and development. Suspending travel on such a broad scale will create negative consequences across the economy. Governments must recognize this and be ready to support."

Airlines are already struggling with the severe impact that the COVID-19 crisis has had on their business, IATA says. On 5 March 2020, IATA estimated that the crisis could wipe out US$113 billion of revenue. That scenario did not include such severe measures as the U.S. and other governments (including Israel, Kuwait, and Spain) have since put in place.

IATA says governments should be looking at all possible means to assist the industry, including extending lines of credit, reducing infrastructure costs and lightening the tax burden.

"Air transport is vital, but without a lifeline from governments we will have a sectoral financial crisis piled on top of the public health emergency,' said de Juniac.

The World Health Organization (WHO) continues to advise against the application of travel or trade restrictions to countries experiencing outbreaks. On 29FEB 2020 the WHO issued revised guidance which included the following:

"Travel measures that significantly interfere with international traffic may only be justified at the beginning of an outbreak, as they may allow countries to gain time, even if only a few days, to rapidly implement effective preparedness measures. Such restrictions must be based on a careful risk assessment, be proportionate to the public health risk, be short in duration, and be reconsidered regularly as the situation evolves."