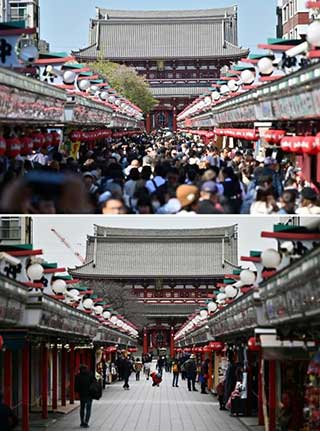 Before and after shots of major tourist sites during the COVID-19 pandemic. 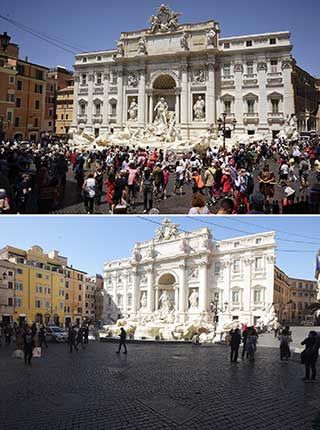 Friday the 13th of March, 2020 was a historic day of disruption for the global travel industry.

Travel advisors scrambled to rearrange their clients' plans – many at the last minute – while tour operators, airlines and cruise lines struggled to cope with unprecedented call volumes.

The developments continued after close of business Friday, so here's a capsule summary of major news through 6:00 pm EST, Saturday, 14MAR.

THE U.S WILL EXPAND ITS EUROPE TRAVEL RESTRICTIONS to include the United Kingdom and Ireland. President Trump also said he was considering restrictions on travel within the United States, though he didn't specify details of the potential domestic bans. The ban on foreign nationals entering the US from Britain or Ireland will begin at midnight on Monday 16MAR.

CRUISE LINES INTERNATIONAL ASSOCIATION announced that all of its ocean-going cruise lines are suspending cruise ship operations from and to U.S. ports of call for 30 days as public health officials and the U.S. Government continue to address COVID-19. The suspension took effect at 12:00AM EST on 14MAR.

WORDS OF REASSURANCE TO TRAVEL ADVISORS were offered by Royal Caribbean Senior VP Vicki Freed. In an interview with Cruise Week, she said: "Of course there is going to be a cruise industry, just like there was an aviation industry after 9/11. And so you will still see cruising become the most popular vacation again. We just have to pause and then reset ourselves, and that's what I think the industry is trying to do right now. It will take time to grow it back. But we will do it together, and as a result we will be more unified and stronger. We're resilient and this industry is not going away. It's hard for the trade to stay positive, to stay optimistic, but it doesn't do any of us any good to do this, 'Woe is me, oh this is horrible, the sky is falling.' Yes, we are in rough seas, I get it, these are tough times. Tough people will last, tough times don't."

PASSENGER PROTECTION REGULATIONS are being temporarily weakened as airlines are being forced to operate in a fast-changing situation.  The Canadian Transportation Agency announced that until 30APR, air carriers will be allowed to make schedule changes without owing compensation to passengers until 72 hours before a scheduled departure time (instead of 14 days), and will be obligated to compensate passengers for delays on arrival that are fully within the air carrier's control once those delays are 6 hours or more in length (instead of 3 hours). The CTA has also exempted air carriers from offering alternative travel arrangements that include flights on other air carriers with which they have no commercial agreement.

ROYAL CARIBBEAN CRUISE LINE announced a 30-day suspension of all sailings effective 13MAR. "We understand the gravity of the public health crisis confronting the country. And this is our part to play," the company said in a statement.

CARNIVAL CRUISE LINE is temporarily pausing service, effective with sailings departing Saturday, 14MAR through 9APR, across its fleet of North America based ships. The line expects to resume service on 10APR. "We remain fully committed to protecting your commission on all impacted sailings," Carnival said.

NORWEGIAN CRUISE LINE HOLDINGS has suspended cruises between 13MAR-11APR for its three cruise brands: NCL, Oceania, and Regent Seven Seas. "All guests on impacted voyages will receive a 125% refund of the fare paid in the form of a future cruise credit, which can be applied toward any future cruise through 31DEC, 2022," the line says. "For guests who wish to not avail themselves of the 125% future cruise credit, a 100% refund of the fare paid will be reimbursed to the original form of payment within 90 days of guests' request."

HOLLAND AMERICA LINE: Holland America Line is suspending all sailings scheduled to depart through 14APR. "These are unprecedented times, and while no guests or crew have tested positive for COVID-19 on any of our ships, we must take a leadership position as a global citizen and ensure that we are doing everything we can to help stabilize the situation," said HAL president Orlando Ashford.

MSC CRUISES is planning a longer operational pause than other lines, announcing a freeze on all its U.S.-based cruise embarkations for 45 days until 30APR.

BAHAMAS PARADISE CRUISE LINE has cancelled all sailings from 15MAR through 8APR. Grand Celebration will resume operations with its 10APR cruise.

G ADVENTURES is suspending all tours departing between 16MAR and 30APR. Any traveller booked on a tour departing between those dates will be eligible for a 110% travel credit of all land services, including pre or post nights and transfers, which can be used on any tour departing within the next two years. Any tours already in operation or due to depart before 16MAR will run as scheduled. Select itineraries will be disrupted and G Adventures will notify these travellers to offer a pro-rata travel credit for the remainder of their tour experience.

VIA RAIL is suspending its Canadian and Ocean operations, its long distance Eastern and Western routes, until Friday, 27MAR. "This exceptional preventive measure was made to help minimize the risk of contamination to the best of our ability," said Cynthia Garneau, President and CEO.

UNIVERSAL ORLANDO RESORT will temporarily close its theme parks and Blue Man Group shows beginning Monday, 16MAR. The company says it anticipates remaining closed through the end of MAR – but will continue to evaluate the situation. Universal Orlando's hotels and Universal CityWalk will remain open.

FRANCE WILL CLOSE "all places that are not essential to French living, including restaurants, cafes, cinemas and clubs," as of midnight 14MAR. French Prime Minister Édouard Philippe announced on Saturday that his country will increase social distancing to combat the spread of the coronavirus pandemic.