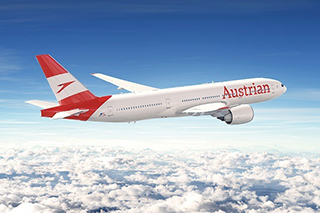 The Lufthansa Group carrier Austrian Airlines will temporarily suspend scheduled flight operations as of Thursday, 19MAR as a reaction to the entry restrictions imposed by many countries in response to the massive spread of the coronavirus.

For the time being, the last flight with flight number OS 066 will land in Vienna from Chicago at 8:20 a.m. on 19MAR. Until then, flight operations are to be reduced in a controlled and structured manner in order to bring all passengers and crews home if possible, the airline says.

Initially Austrian will cancel all flights until 28MAR, and passengers who have booked a flight with Austrian Airlines during this period will be rebooked on other airlines if possible.

In addition, Lufthansa Group airlines will further reduce their short- and long-haul schedule. The cancellations, which will be published 17MAR, will lead to a sharp decline in long-haul service especially in the Middle East, Africa and Central and South America.

Overall, the Lufthansa Group's seating capacity on long-haul routes will be reduced by up to 90%. A total of 1,300 weekly connections were originally planned for summer 2020.

Within Europe the flight schedule will also be further reduced. Starting tomorrow, only around 20% of the originally planned seating capacity will still be offered. Originally, some 11,700 weekly short-haul flights were planned for summer 2020 with Lufthansa Group airlines.

The additional cancellations will be published over the next few days and passengers will be informed accordingly.