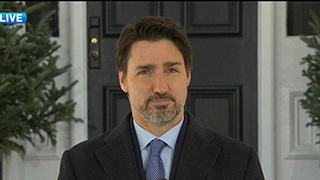 Prime Minister Justin Trudeau has announced that the Canada-United States border will be temporarily closed to non-essential travel in order to slow the spread of COVID-19.

"Travellers are no longer permitted to cross the border for recreation and tourism," said Trudeau in an address this morning.

At this time it is unclear when the restrictions will come into effect, but Trudeau noted that Canada is working with the United States government to have them applied "in a short time." More announcements will be made at a later time.

Essential travel will continue across the Canada/US border.

"Our governments recognize that its critical to preserve supply chains within both countries that ensure food, fuel and life-saving medicines reach people on both sides of the border," he said, adding that the trucking industry will not be affected.

The prime minister said that these measures will "remain in place as long as we feel they need to last."

On Monday, Trudeau announced that Canada is closing its borders to non-residents. At the time, the restrictions did not apply to U.S. citizens or the U.S. border.

Trudeau also unveiled major new economic measures and support that the federal government is taking in response to COVID-19.

"In these extreme times, our government is taking extreme measures," said Trudeau.

The prime minister unveiled a support package totaling $82 billion – a figure comparable to 3% of Canada's GDP -- that includes $27 billion in direct support to Canadian workers and businesses, plus $55 billion to meet the liquidity needs of Canadian businesses and households through tax deferrals to help stabilize the economy.