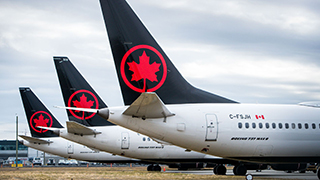 Air Canada will gradually suspend the majority of its international and U.S. transborder flights by 31MAR in response to decisions by national governments, including Canada and the United States, to close borders and restrict commercial aviation.

CEO Calin Rovinescu says the moves are necessary but painful. "The restrictions on travel imposed by governments worldwide, while understandable, are nonetheless having a cataclysmic effect upon the global airline industry.”

Subject to further government restrictions, the airline says it intends to continue to serve a small number of international and U.S. trans-border destinations from select Canadian cities after 1APR.

Air Canada says it will continue to operate a limited number of international "air bridges" between one or more of its Canadian hubs and the cities of London, Paris, Frankfurt, Delhi, Tokyo and Hong Kong from 1APR until at least 30APR. This will reduce its international network from 101 airports to six. The purpose of the air bridges is to facilitate the continued repatriation of citizens to their home countries, including Canadians back to Canada, and to support the essential movement of needed goods and cargo during the crisis.

Following the border decisions announced by the U.S. and Canadian governments, from 1APR, Air Canada will reduce its transborder network from 53 airports to 13, subject to further reductions based on demand or government edicts.

AC says it will continue to serve all provinces and territories of Canada, reducing its domestic network from 62 airports to 40 during the period 1-30APR, subject to further reductions based on demand or government edict.

“Our immediate focus is on ensuring the safety and well-being of our employees, customers and communities. At the same time, we are exploring with the Government of Canada possibilities to maintain essential operations to enable as many Canadians as possible to return to Canada, and to support other vital transport needs, including the shipment of goods and cargo during the crisis as required in any state of emergency.”

Rovinescu continued: “We are working around the clock to deal with the impact for our customers and our business of the various travel restrictions that are being made by governments at unprecedented speed without advance warning. We will also look at helping Canadians to return home by operating a limited number of charters from international destinations and exploring with the Government of Canada avenues in this regard.”

The airline will gradually suspend some of its scheduled flights between now and 31MAR as demand for Canadians to return to Canada from a number of destinations reduces. AC says travellers and advisors should check its website for details, given the rapidly evolving situation.

Customers, including those with Air Canada Vacations packages, whose flights are cancelled will receive a full credit valid for 24 months. A press release states: “There is no requirement to contact Air Canada as customers will be contacted directly.”

The airline has also put in place temporary, one-way fares to Canada to enable customers abroad to return home.

Customers seeking to contact Air Canada are advised that contact centre wait times are elevated, so the airline has put in place a number of self-service tools to enable customers to manage travel online.

David Roy - March 19, 2020 @ 16:32
The flight from San Jose CR on Sunday March 22nd was booked sold, no seats available. You cancelled it. Unacceptable, do not tell us flights will be cancelled as demand dictates. A full flight is a full flight. Thanks for nothing Air Canada. Pam - March 19, 2020 @ 11:31
AC needs to extend rebooking and use of flights credit deadline as many cruise travellers are rebooking for 2021 . Richard - March 19, 2020 @ 10:41
AC and ACV was sending out emails everyday upto last week 12Mar of all kinds of promotions etc, but nothing after that to support agents.......
24 months to use the credit......hopefully AC and ACV will still be around... teresa maceroni - March 19, 2020 @ 10:12
in total agreement with TRAVEL AGENT
THANKS FOR NOTHING .. we are working not at home just to cancel many many bookings and no one seems to appreciate the work that goes into trying to get as much money back for the clients besides the fact of recall
commissions
how much more can our poor industry take ?!!
hang in there mighty travel agents
we will overcome !! xo A TRAVEL AGENT - March 18, 2020 @ 21:20
It is unfortunate that Mr Romanescu could not thank travel agents for their efforts in this critical time, nor could he suggest our industry be mentioned as an alternate to waiting on the phone lines. Perhaps he is not aware of our contributions nor our losses when commissions are recalled. judith farovitch - March 18, 2020 @ 19:49
excellent report. Norma - March 18, 2020 @ 19:43
Looks like you made it!