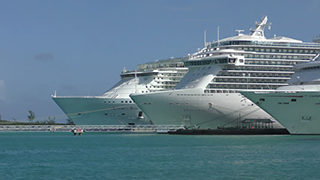 After weeks of White House press conferences where President Trump repeatedly hinted that the cruise industry would be included in the largest stimulus in modern history, the US$2 trillion measure passed by the Senate last night may not cover the industry after all.One well-connected cruise source told Cruise Week: "I understood that cruise companies themselves would not be included."As late as Sunday evening, President Trump indicated at a press conference in Washington that cruise companies would be on the receiving end of some sort of bailout ("We have to provide for that.") Since then, talks of loan guarantees have been mainly what cruise companies are talking about.Other than at White House press conferences, there has been growing criticism that the cruise industry should not be part of the corporate stimulus plan based on their favourable tax situation.The U.S. entity Carnival Corporation is based in Florida but is registered in Panama. Royal Caribbean Cruises Ltd. is based in Miami but incorporated in Liberia. Norwegian Cruise Line Holdings is "domiciled" in the U.S. but its 8-K filing this month lists Bermuda as its state or other jurisdiction of incorporation.It should be pointed out that, despite hopes of inclusion generally by those in the industry, CLIA has repeatedly said during the process that "the cruise lines are not seeking a bailout." Carnival Corp. has said the same.The general belief from industry sources is that even if the cruise lines are not included in some form in the bailout, big companies should have enough reserves to ride it out, hence cruise stocks are climbing in tandem with -- and even exceeding -- other stocks over the past two days, ever since word came that an agreement on the stimulus had been reached by leaders in the Senate.The economic foundations of the country need a lifeline in order for companies to ultimately recover.So the cruise companies best hopes are that support for travel agents to be included in the broad package, "perhaps under small business support at a minimum," said one top cruise source.During last night's White House press conference, Treasury Secretary Steven Mnuchin echoed McConnell's words.Key parts of the stimulus measure are the $367 billion for small businesses to keep making payroll while workers are forced to stay home, and some $250 billion in unemployment insurance benefits aimed at helping people recently laid off, which certainly would apply to many in the travel business.However, despite the big numbers being tossed about, many agents Cruise Week contacted were less than hopeful that they would ultimately see enough money set aside for leisure travel agent needs, expecting airlines to get the great bulk of, though not all, of the $25 billion of the Airline Economic Stabilization Loans.

Marc - March 26, 2020 @ 14:53
But cruise lines aren't even looking for a bail-out according to the CLIA and Carnival. However I do hope that the government's promises to support will be true, because with a 52.7$ Billion dollar impact on the U.S economy, Cruise activity supports agencies, airlines, hotels and a broad supply chain of industries in the U.S and is responsible for 421 000 jobs in the country! Richard - March 26, 2020 @ 11:21
Cruise Lines are registered in other countries so they can pay minimal taxes, employ people from other countries paying minimal salaries and now they want money from the US govt to be rescued.............