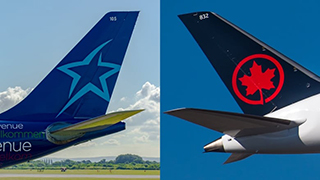 The Competition Bureau announced Friday that it believes Air Canada's proposed acquisition of Transat is likely to result in a substantial lessening or prevention of competition in the sale of air travel or vacation packages to Canadians.

“Eliminating the rivalry between these airlines would result in increased prices, less choice, decreases in service and a significant reduction in travel by Canadians on a variety of routes where their existing networks overlap,” the Bureau stated in a press release.

The concerns are outlined in a report delivered to the Minister of Transport by the Commissioner of Competition. The next step is Transport Canada’s public interest review of the proposed transaction as it relates to national transportation.

The Competition Bureau analysis determined that the effects of the transaction would apply to 83 air routes, including:

In response to the findings, Transat Chairman Jean-Marc Eustache stated: “We must look at the Competition Bureau report with a bit of perspective, and not draw any direct conclusions from it with regard to the final decision.

"The Commissioner's role is limited to studying the impacts on competition in the marketplace; in other words, identifying potential difficulties, without necessarily contemplating what solutions or mitigation measures might be implemented, and without taking the public interest more broadly into account.”

Transat Still Confident A Deal Can Be Done

“With the transaction now the subject of a public interest assessment being conducted by Transport Canada, the report of the Commissioner of Competition will be one of the elements of a broader analysis that will include stakeholders' proposals for fostering competition, the findings of the public consultations, and an analysis of the transaction's positive impacts on travellers, employment, tourism and the international positioning of Canadian businesses.”

In summarizing its position, Transat states: “This report does not affect the company's confidence in the transaction with Air Canada, which will produce many long-term benefits for all stakeholders.”

The release of The Competition Bureau’s report comes during an unprecedented crisis that has had a catastrophic impact on both players in the proposed merger.

Due to the COVID-19 pandemic, on 18MAR Transat announced the gradual suspension of all of its flights until 30APR. The company has temporarily laid off 70% of its employees in the past week. Air Canada has laid off over 50% of flights attendants and will suspend the majority of its international and U.S. flights by March 31.

The Competition Bureau acknowledges the world has changed since its analysis.

“Our assessment is based upon a forward-looking analysis using data and information collected prior to the current COVID-19 pandemic. The Bureau recognizes that the impact of these events on the Canadian airline industry appear to be significant in the near term. The ultimate impact of these events may be relevant to the Bureau’s views on the proposed transaction but it is impossible to know the full extent and duration of any impact at this time.”

In its statement, Transat says the current situation “is calling into question the relevance of any analysis conducted prior to (the) outbreak.”

Eustache says: "Particularly against the background of the COVID-19 crisis, our transaction requires a broad perspective that takes into account the company's future, the protection of jobs, the advantages for travellers and the interests of all our other stakeholders, including our investors, our partners, and the communities where we operate."

“The new company envisioned by the merger would remain a modest player in this market dominated by large international airlines that also operate on routes between Europe and Canada. In the context of the rebuilding of the market following the current crisis, the existence of such a player in Quebec and Canada would be a major asset.”

AC is offering $18 per share. Currently, Transat shares are trading at barely half that level, closing 27MAR on the Toronto Stock Exchange at $9.49.

“If I were Air Canada and the Competition Bureau imposed conditions on me to get a deal done, I’d probably refuse and step away,“ Roy told the newspaper. “We might be heading toward a renegotiation of the deal.”

For now, it’s safe to say that The Competition Bureau report will be sitting on a shelf for a while, while Transat and AC management keep a strong focus on managing through a crisis.

AC says its current priority is to cut costs, conserve liquidity and safeguard employees and pax.

“Given the unprecedented impact of the COVID-19 crisis on the airline industry and the state of emergency worldwide, we will consider the findings of the Competition Bureau in due course,” the airline said.