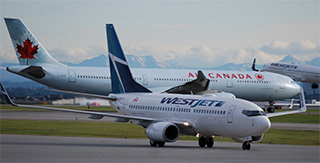 Air Canada, WestJet and Flair Airlines say they intend to rehire many of the employees furloughed due to the continuing COVID-19 crisis after the federal government passed a promised federal emergency wage subsidy.

Air Canada announced Wednesday that it plans to use the Canada Emergency Wage Subsidy (CEWS) to backtrack on plans to reduce its workforce of roughly 33,000 by half — part of an overall COVID-19 cost reduction program revealed on 30MAR.

"The Canada Emergency Wage Subsidy is an extremely important program to help employees and employers during this time of crisis, and as one of Canada's largest employers most affected by COVID-19, we want to acknowledge the leadership of the Government of Canada in introducing it," said Calin Rovinescu, President and Chief Executive Officer at Air Canada.

WestJet Airlines has also made the move to rehire nearly 6,400 employees who were laid off due to the novel coronavirus pandemic, the airline’s president and CEO Ed Sims announced Wednesday.

WestJet has cancelled all transatlantic and U.S. routes until 4MAY and has halved its domestic capacity.

Last month, WestJet announced it was cutting roughly half of its 14,000 employees with the elimination of 6,900 positions.

In a video address, Sims said the move would not necessarily mean those employees will be going back to work, “as there may simply not be enough work there for them.”

Flair Airlines has announced that it will rehire employees it previously laid off thanks to CEWS, restoring it to a “pre-pandemic” level.

All 130 employees that were previously laid off due to the COVID-19 crisis by the airline have been rehired, and all salaries of employees who had faced reductions have been restored to their previous levels.