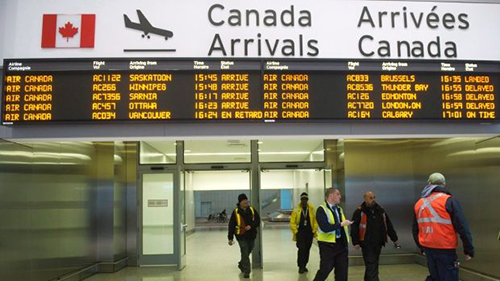 While transborder and international flights coming into Canada have been significantly curtailed since the outbreak of COVID-19, thousands of passengers are still arriving each week at the country's airports, and an infection control epidemiologist believes it is cause for concern.

"The fact of the matter is this pandemic arrived everywhere in the world through travel," Colin Furness, who is also an assistant professor with the University of Toronto's Faculty of Information, said in an interview with CBC.

"We should be closing our borders as much as we can. We can't bring [the number of entrants] down to zero but we should get as close as we can."

Other international travel in that time period saw a 97% decrease from last year's total of 374,775. This year, during that same week, 10,845 people arrived at one of the four Canadian airports that accept international flights — YUL, YYZ, YYC and YVR.

Two months ago, Prime Minister Justin Trudeau announced the federal government was barring foreign nationals from all countries except the U.S. from entering Canada.

But an order in council later that month exempted a number of individuals, including immediate family members of a Canadian citizen, emergency service providers, temporary foreign workers and international students.

Anyone arriving in Canada by air or land must complete a contact tracing form to help the Public Health Agency of Canada monitor and enforce the 14-day quarantine or isolation requirement. Failing to comply with the Quarantine Act can lead to a fine of up to $750,000 and/or imprisonment for six months.

Last week, PHAC revealed to CBC News that police officers have made nearly 2,200 home visits to make sure Canadians are complying with the self-isolation rules when they return to Canada.