As Pressure Mounts, Garneau Says Airline Refunds Would Be "Devastating" 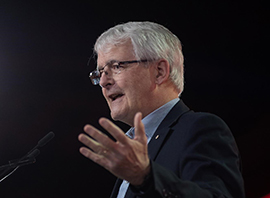 The federal government has still not committed to a bailout of Canada's airline sector, but it's also not planning to require carriers to refund ticket holders for cancelled flights due to COVID-19.

Despite expressing "enormous sympathy" to travellers who are out of pocket, federal transportation minister Marc Garneau said last week that forcing reimbursements on a sector that has lost more than 90% of its revenue during the COVID lockdown would have a "devastating" impact and cripple an industry that’s vital to Canada, writes TricityNews.

“It’s too essential for this country,” Garneau said of the airline industry. “Canada is the second-largest country on Earth with vast distances and remote areas… and the airlines in this country are just as important as what we recognize today the importance of being connected by broadband Internet."

Meanwhile, an opinion piece published in the Globe and Mail says airline customers have no right to complain about not getting refunds.

Ashley Nunes, a senior research associate at Harvard Law School, writes that globally, airline profits on a per passenger basis add up to just more than $8. This explains why airlines aren’t keen on returning cash for cancelled flights – for one, they need it to survive.

For another, the legality of withholding refunds is less than clear.

The Canadian Transportation Agency says that “for flights cancelled for reasons beyond airlines’ control, the Air Passenger Protection Regulations, which are based on legislative authorities, require that airlines ensure passengers can complete their itineraries but do not obligate airlines to include refund provisions in their tariffs.” However, the CTA has also reluctantly implied that passengers are entitled to a refund regardless of why a flight is cancelled.

In terms of the moral case, it’s clear that airlines are in the right, particularly if passengers proactively cancelled their trips, Nunes adds.

“Imagine you rent a car for a family outing,” she writes.

“You prepay the car-rental agency and start packing. Shortly thereafter, you discover that Algonquin has been unexpectedly closed because of flooding. Is it really immoral for the car-rental agency to hold onto your cash because you can no longer visit the park? Why is the park’s closing the concern of the auto agency? Since when did one enterprise become fiscally responsible for the actions of another?”

But not everyone is so understanding, and the pressure on airlines has intensified in recent weeks.

The Quebec National Assembly voted in favour of a motion on Thursday asking Ottawa “to order the airlines … to allow customers whose trips have been cancelled due to the current pandemic to be reimbursed," CanadianPress reports.

The motion was presented by Parti Québécois MP Véronique Hivon and adopted unanimously without debate.

With the motion, the Quebec government took a clear stance on the issue, adding its voice to consumer advocacy groups and tens of thousands of Canadians that have been calling on the federal government to force airlines to offer refunds.

If carriers like Air Canada do not have the funds to reimburse their customers, “well, that’s their problem,” said PQ interim leader Pascal Bérubé.

In addition to this, a Change.org petition launched by air passenger rights advocate Gábor Lukács to lobby Ottawa to mandate a refund has gathered more than 60,000 as of this morning.

So far, the federal government has not committed to requiring airlines to offer refund.

Leonard Sanicharan - June 5, 2020 @ 18:26
Air lines should start removing all those incidental charges eg seat cost and ridiculously high date change penalties. Airlines should reinstate commission to travel agent who work so hard to get the passengers to check in counter of the airlines. BETH - June 1, 2020 @ 14:21
Let the complainers who bought non-refundable tickets get their money back. Then the airlines will go out of business and it will serve them right. Let air travel become the travel for just the rich like in the 1950s. Most of the complainers will never be able to afford to fly again. Boo hoo. Karen Murphy - June 1, 2020 @ 14:07
Airline refund debate continues WENDY CHAPUT - June 1, 2020 @ 13:18
Wages for agents are less than 1982? Wanda Grzesik - June 1, 2020 @ 12:51
Perhaps it's time that airlines were profitable? Enough cheap flights where no one is making money! Airfares to Europe in 2020 are same or cheaper than in 1982 ! The industry needs an overhaul for sure.