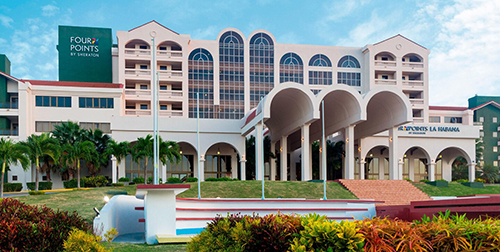 The Trump Administration has ordered Marriott International to wind down operations of its Four Points Sheraton in Havana by 31AUG.

Marriott would also not be allowed to open other hotels it had been preparing to run.

The move comes as the U.S. State Department expands its list of Cuban entities with which Americans are banned from doing business to include the military-owned financial corporation that handles U.S. payments to Cuba.

The Four Points Sheraton in Havana, like a large portion of Cuba's overall tourism sector and economy at large, is controlled by the commercial arm of the Cuban military.

A spokesperson for Marriott said of the move: “We entered the Cuban market in 2016, with permission from the U.S. government. Our operating license was reviewed and renewed in 2018. We have recently received notice that the government-issued license will not be renewed, forcing Marriott to cease operations in Cuba. Marriott continues to believe that Cuba is a destination that travellers, including Americans, want to visit. Marriott looks forward to reopening in Cuba if and when the U.S. Government gives us permission to do business there again.”

A U.S. Treasury Department spokesperson told Reuters it could not comment on specific licensing matters, but that the Trump administration aimed to prevent Cuba’s military from using revenue from tourism to “oppress its own people."

According to Reuters, the approach could help Trump bolster support in the large Cuban-American community in Florida, a state considered vital to his re-election in NOV.

Four Points by Sheraton is owned by Starwood Hotels & Resorts, a subsidiary of Marriott International.

Starwood Hotels in 2016 became the first U.S. hotel company to sign a deal with Cuba since the 1959 revolution amid a thawing of relations under former U.S. President Barack Obama.

The move comes as Cuba continues to battle the coronavirus pandemic. But at least on that front, there is some good news.

While the World Health Organization has identified Latin America as the new epicentre of COVID-19, new cases in Cuba have fallen drastically over the last two months, reports TheGuardian.

The success highlights that the Cuban government's evidence-based approach and strict enforcement to battle virus spread is working.

The Communist-run country's free and universal healthcare system has proved key in containing Covid-19. The state has commandeered tens of thousands of medical personnel to “actively screen” all homes on the island every single day, a measure made possible due to the country having the highest doctor-to-patient ratio in the world.

The use of face masks in public is mandatory in Cuba, and people who refuse to wear them can be fined or even jailed.

Everybody who tests positive on the island is hospitalized and people suspected of carrying the virus are put into state-run “isolation centres”, usually for 14 days.

Bob McErlean - June 9, 2020 @ 17:38
WOW! Free healthcare for all. Sounds like a familiar refrain. Obviously, so much thanks to the communist regime for treating it's people so fabulously. Kudos to President Trump for standing up to totalitarianism. Rhonda - June 9, 2020 @ 14:38
Great article! Thank you for keeping us updated on travel and tourism around the world. I find it very interesting the ratio of doctors to patients is the highest in the world. Bravo! Ranka Matejic - June 9, 2020 @ 13:58
I agree with Nina and the article 100%, we Canadians are supporters of Cuban people and the island Has one of the best and very beautiful Beaches in the world and the nieces people in the Caribbean and one of the safest destinations. Nina Slawek - June 9, 2020 @ 13:06
@Dawn
I can appreciate your perspective on editorializing the news. The article itself actually doesn’t. So I imagine you are referring to the newsletter where the irony of the situation was highlighted.
We are Canadian. We value civil liberties a great deal and, as such, your right to express your displeasure. We are also strong supporters of Cuba and know from experience tourism dollars help the population survive.
Twenty years ago when I launched OpenJaw I vowed not to be a dry source of news since, as a B2B vehicle, we are a very close knit community.
We may not represent your point of view, but there is certainly no intention to insult anyone.
Nina Slawek
President
OpenJaw.com Dawn - June 9, 2020 @ 12:31
Please report, without your throwing in your opinion. Your political views are not needed. Just report the news! Maybe the travel/tourism wasn't the best choice. In the travel industry you MUST be accepting of all cultures/politics/lives. I was insulted by this report. We can form our own opinions about the news.