The Future Of Air Travel Is Uncomfortable And Expensive, Say Experts 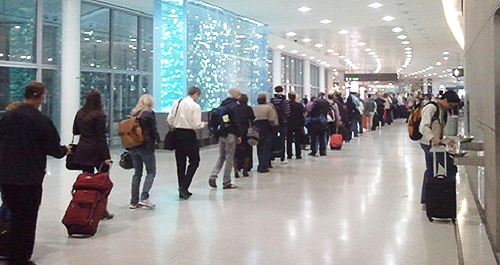 As air travel slowly comes back online, Canada's carriers now face the dilemma of generating enough revenue to stay viable, while at the same time implementing measures to keep passengers and employees safe.

Physical distancing rules at airports could further shrink capacity and cause long wait times at terminals, making it even harder for carriers to recoup their losses. With enhanced aircraft cleaning procedures, which will likely mean more time between flights, and fewer passengers travelling overall, it could badly dent airlines' profits.

“Cleaning up, safety procedures — that will delay flights. And it will have some level of expenditures,” Jacques Roy, a professor of transport management at HEC Montreal business school, told Canadian Press.

“But the most important thing would be to remove the middle seat. That would reduce capacity by one-third. To compensate, you have to increase prices.”

According to IATA, physical distancing measures on board aircraft in North America will drive up the average fare by 43%, increasing from on average US$202 in 2019 to US$289.

"Eliminating the middle seat will raise costs. If that can be offset that with higher fares, the era of affordable travel will come to an end. On the other hand, if airlines can’t recoup the costs in higher fares, airlines will go bust. Neither is a good option when the world will need strong connectivity to help kick-start the recovery from COVID-19’s economic devastation,” said IATA CEO Alexandre de Juniac.

IATA says mandatory face coverings eliminate the need for physical distancing on board and that aircraft seats "provide a barrier to transmission forward to aft in the cabin." IATA also maintains that on board air flow from ceiling to floor "further reduces the potential for transmission forward or aft in the cabin, that air flow rates are not conducive to droplet spread, and that High Efficiency Particulate Air (HEPA) filters on modern aircraft clean cabin air to operating theatre quality.

For now, most regulators have not acted on IATA’s push for middle seat occupancy.

WestJet said in an email to Canadian Press it will reassess its no-middle-seat policy at the end of the month, while an Air Canada spokesman said that “it is not possible to speculate on the future possibilities.”

But Dr. Paul Pottinger, professor of infectious diseases at the University of Washington’s School of Medicine, told CP that airlines may end up finding they need to entice passengers with rigorous health and hygiene protocols rather than filling each flight to capacity.

Micheline Dion - June 16, 2020 @ 13:15
If airlines costs are predicted at 40% increase, we are in for very difficult times to enable all those future travel vouchers and keep customers happy. It will be a very turbulent ride for sure. Rob Kokonis - June 15, 2020 @ 16:54
Longer term beyond the current crisis, and even as we recover through the crisis, blocking the middle seat (or equivalent on widebody aircraft) is simply a non-starter. The airline economic model cannot support this. AC CEO Calin Rovinescu pretty well said this last week in an industry conference call.

As far as impacts on fares, sure, IATA Economics has done their big study, and your article quotes a professor from academia-land. Truthfully, while no one can be certain what will play out, other voices are being heard who disagree with the higher fares crowd.

Take JetBlue COO Joanna Geraghty, who was speaking at a recent global aviation event. When asked about higher costs due to PPE, heightened aircraft cleaning, etc., Joanna said that she and JetBlue do not see Covid as causing airfares to rise. Specifically, she stated: “Fares are largely a function of supply and demand. As long as demand starts coming back, I would expect that fares will stay reasonable. JetBlue has a long history of lower fares, and making sure we have fair fares is an important part of our legacy and our future. We are very much focused on how to ensure that, as we exit this crisis, we can continue to deliver fair fares to our customers.”