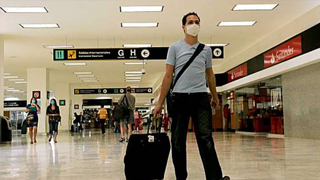 Strict quarantine rules requiring travellers to isolate for 14 days upon their arrival in Canada were set to expire 30JUN. A government official who spoke to the CBC on condition of anonymity said the feds will announce an extension once it has been finalized.

The original order required all returning Canadians to self-isolate for 14 days and not to stop anywhere along the way home.

Once isolated, the traveller was required to report the development of any COVID-19 symptoms to public health officials.

In April, those quarantine rules were strengthened. Canadians returning home from abroad who didn't have credible plans to self-isolate were required to stay at a quarantine facility. They were also required to wear a mask or face covering before proceeding to their final destination.

If the Canada Border Services Agency suspects that a returning traveller is not going to comply with the rules, it can alert the Public Health Agency of Canada, which can then flag the RCMP's national operations centre. The RCMP has been playing a coordinating role with local police during the pandemic.

Maximum penalties for failing to comply with the Quarantine Act include a fine of up to $750,000 and/or imprisonment for six months. If someone jeopardizes another's life while wilfully or recklessly contravening the act, the penalties are even greater: $1 million or three years in prison, or both.

By late May, police officers had made nearly 2,200 personal visits to ensure that Canadians were complying with the self-isolation rule once they'd crossed back into the country.

Interestingly, consumer comments below the CBC article reflect a general consensus regarding the extension of traveller self-isolation rules. This is in sharp contrast to the travel industry which has been lobbying Ottawa to relax traveller rules and allow business to return.

The airlines have also changed on-board social distancing protocols by no longer blocking the middle seat.

The opposing views and regulations of the various stakeholders are creating a confusing environment for Canadians deciding whether or not to travel.