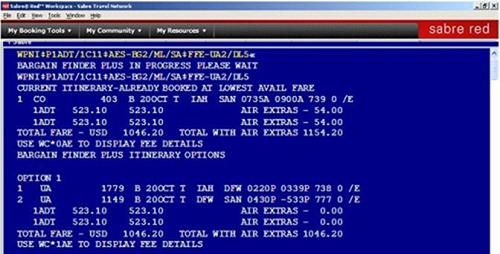 In a plot right out of a Tom Clancy novel, American border patrol apparently relies on Sabre to hand over traveller data and, on at least one occasion, do “real-time” tracking of a suspect. It's unclear how deep the Sabre and U.S. government ties go, but former Sabre execs say the same powerful trove of information could be used to help monitor the spread of Covid-19, Forbes reports.

Texas-based Sabre, the biggest of the three GDS companies, stores the majority of the world's travel information. It's also the only one of the big three which is US-owned, Amadeus being Madrid-based and Travelport British.

Who actually owns passenger data has been a long-running discussion in the travel industry. Retailers who input their client’s travel details argue the data belongs to them. Knowing it’s in the hands of the U.S. government is a chilling image.

Publicly, Forbes says Sabre’s affiliation with the U.S. government has been apparent for some time, but there's a secret side of the relationship. Stretching back to at least the 9/11 terror attacks, the government has, on numerous occasions, secretly asked the company to actively spy on suspects’ movements.

For years, the U.S. government has asked telecom giants and banks to help track individuals worldwide. But Sabre provides a powerful data store with global implications.

With financial institutions or the telecom industry, the government has to serve separate orders to each individual company, Forbes explains. But with Sabre, one order provides airline, hotel, car rental and itinerary information.

That’s one explanation as to why the company played a role in assisting the U.S. in tracking the movements of the 9/11 hijackers, former Sabre execs told Forbes.

Now Sabre’s data could be used to go from hunting fugitives to stopping an invisible virus.

The same data tap that has been turned on by the FBI could prove a useful boon for the U.S. government in surveilling the spread of Covid-19, providing a constant and accurate record of the movements of global populations.